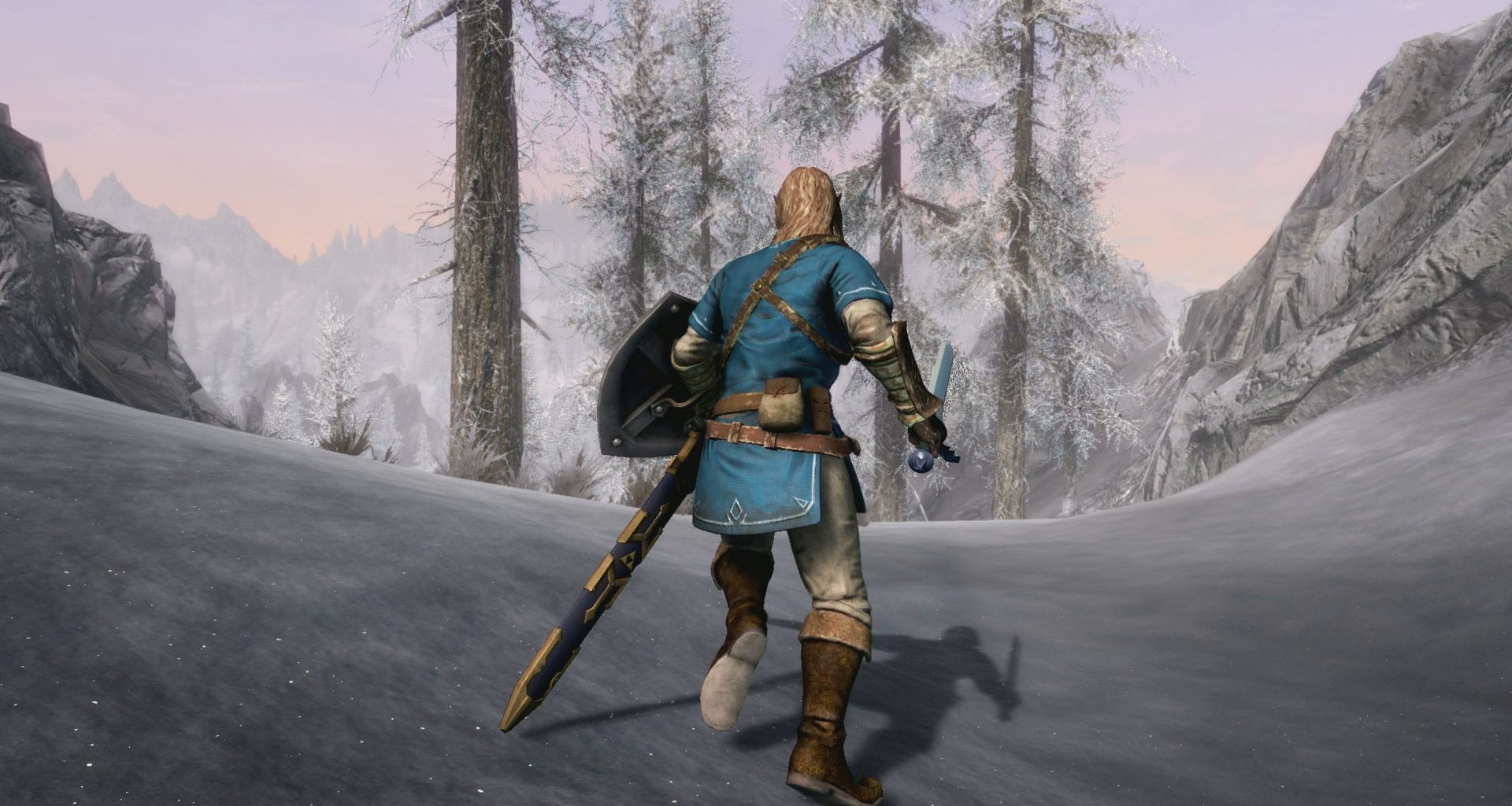 You’re a convict in a strange freezing land, nabbed for something you didn’t do, and subsequently sentenced to death. There’s snow on the ground, and blood still pools on the block from the person beheaded only moments before you. The headsman gestures to you, and people in furs with strange accents watch coldly on as you are lead to the block. As you kneel down, you think you hear a strange roar…

Then everyone sees the dragon and all hell breaks loose.

That’s the beginning of Skyrim, the fifth title of the Elder Scrolls series, which sets you down in the cold northern region (also called Skyrim), which is home to the Nords, and far to the north of the regions Cyrodiil and Vvardenfell, where the earlier games Morrowind and Oblivion were set.

Like the previous titles, you begin the game in rags, homeless, friendless, and with no idea of the great destiny that awaits you. In the case of Skyrim, your character is one of a rare few Dragonborn – a person with the ability to harness The Voice, a language-based power used by dragons. With the land in serious political upheaval after the High King is assassinated, choices that you make over the course of your adventures will affect the outcome of this land’s internal struggle.

In terms of character creation, there are ten different races to choose from – including various flavours of humans and elves, as well as the cat-like Khajit and amphibian Argonians. Once the hard choice has been made (each race has different strengths and weaknesses), from this point you can choose from a wide range of cosmetic customisation options, such as sex, facial features, hair, warpaint, and scars. You’ll notice right away that there has been a massive leap forward from the of Morrowind and Oblivion. The updated character design system is fantastic.

There’s also been a considerable change to the skills aspect in that – unlike previous Elder Scrolls titles – you don’t choose a class when you create your character. Bonuses to skills are instead bequeathed on players by way of ‘sign blessings’, which are activated at ancient standing stones that you’ll find dotted across the land. Initially you can choose from a blessing from the warrior, mage or thief, which gives you a 20% speed to learning the chosen class’s skills, but later you’ll come across others and can change your blessings as you like.

From this point on, the development of your character is completely up to you. This is one thing I have always enjoyed about the Elder Scrolls games (and if you have never played them before it may come as a surprise): you can develop your character in any way you like. You can play as a mage in heavy armour, a barbarian who likes to pick flowers and make potions, or a fighter who likes sneaking and pickpocketing. What’s more, leveling up doesn’t come from earning experience points, but instead through the gradual acquisition of skills, so working on your blacksmithing will bring you nearer to the next level just as quickly as hacking through skeletons will.

Levelling has also had some streamlining. In the past when you levelled up you’d be allocated a set number of skill points, which you could then use to further increase different skills. However this time around, when you level up you select from either Magic, Health or Stamina to increase your capacity in that area by ten points. You also are given one perk point, to assign to the skill perk tree of your choice, assuming you meet the requirements. You can save up your perk points and allocate them later on for one specific area, or spread them around to make the overall gameplay more interesting.

While initially these options felt a bit dumbed down, I changed my mind once I had a good look through all of the different perk options. There’s so much here, from perks to increase your basic blacksmith skill so you can work with more exotic materials, to one that gives you better chances to pickpocket sleeping NPCs. It’s different, but it works.

Shouts, a new type of character ability, are special dragon-voiced commands that you’ll pick up as you progress through the game. They are essentially ‘super abilities’, that can grow in power as you learn extra words that you can then string together. Some can be quite devastating, such as the shout that will knock your enemies to the ground, stunning them in the process, while others have more specific uses, such as the shout that will calm angry animals. They work pretty well in regular battle, but dragons seem to be particularly susceptible to their powers.

Skills aside, where the Elder Scrolls games really shine is in the opportunities they give the player for exploration. Like the other games, Skyrim boasts a huge map, populated with all sorts of interesting people and places to discover, and with no railroading to your gameplay or travel choices.

As it’s set in a very Nord-specific environment, Skyrim has less variation than say, Morrowind (which was insane in its scope), but there is still so much to discover that it will take your breath away. Cities, forts, ancient burial grounds, shrines, palaces, and schools of learning all hold considerable potential for exploration and adventure.

Nearly every NPC you meet will have a story to tell you, too, and it’s likely that after a few conversations someone may offer you a quest. These can take the shape of a simple fetching or delivery-style objective, or they may be the beginning of a significant adventure.

The fighting front continues to be the Elder Scrolls’ weakest point, with combat tactics consisting of wildly swinging awesome-looking weapons around while moving back and forth trying to keep track of where your enemy has gone. That said, stealth with bows is still an excellent strategy, and as you develop your weapons skills the game will sometimes cut to a spectacular coup de grâce which will help to finish off the baddie.

The magic system however is just as deep and comprehensive as previous Elder Scrolls titles. There are five schools of magic, Destruction, Alteration, Illusion, Conjuration, and Restoration, and you can specialise in one or many of these.

Enchanting has had a bit of a revamp, in that to learn an enchantment you must first break down an existing enchanted item to learn its secrets before you can combine it with an item and then power it up with a soul gem.

There’s also Alchemy, which is a tough skill to learn initially, but after picking up a few perks in this area it becomes a lot easier to invent new potions and poisons from ingredients collected during your travels.

If you think this means there’s a lot to keep track of – well, you’re right. Fortunately quest and inventory management is excellent. Oblivion’s notebook-style interface has thankfully been ditched, and as a player used to the PC versions of these titles, I was pleased to discover the 360’s interface for navigating maps, magic, skills, and stuff was really well done. And once I figured out how to add weapons and spells and abilities to my ‘favourites’ menu, switching between weapons mid-battle became a breeze.

But it’s not just about questing and fighting. Eventually you’ll slow down from the frenetic exploration, and spend some time getting to know the people. From conversations with NPCs you’ll get a feel for the all-pervasive political issues, and watching the rifts develop between groups of people in the same town, and taking part in either the rebellion, led by Ulfric Stormcloak, or siding with the Imperials, is a compelling experience. But lest you think it’s all about the grand political scheming, you’ll also encounter NPCs who are lovelorn and need your help, or who want to take you on in a fistfight or drinking competition.

And for more ‘quiet time’ gameplay, Skyrim has really beefed up its crafting side. You can now make items entirely from scratch, whether it’s making leather from pelts, which can then be made into armour, working on enchantments on a special enchanting table, or even mining and then smelting your own ore.

If you need to make a quick buck, NPCs will often pay you money if you chop them a bit of wood, or help harvest vegetables from their gardens. And while it’s not likely that you’ll spend a great deal of time in this sort of occupation, it definitely adds to the world immersion.

And oh, the immersion. Skyrim is a beautiful game, and in terms of artwork and graphics it has made so many leaps past the now-six-years-old Oblivion. Lighting and textures are gorgeous, NPCs (as mentioned earlier) have some real variation and personality, and the gear looks amazing too.

Unfortunately I experienced some glitches in my run-through on the 360. As a minor inconvenience, after being shot with an arrow right through the head, my character had to wander around with it sticking out for some hours before another battle ‘refreshed’ back to her original appearance.

More concerning were several quests where specific events didn’t trigger, though upon reload and replay of the sequence I was able to progress – for this I’ve dropped the graphics score.

That said, in my thirty-five hours of gameplay these glitches were pretty uncommon. Just make sure you save frequently and you shouldn’t have any problems.

Glitches aside, Skyrim is a big, beautiful game, that will overwhelm with its physical and emotional depths. And after thirty-five hours of playing I feel like I’ve only experienced a hint of what the Skyrim world has to offer. I love the way it manages to combine sandbox-style gameplay without sacrificing story progression or big political moments that lend credence to the experience of a real culture.

Playing Skyrim is like getting lost in a massive series of fantasy novels, only this time you’re writing them yourself.