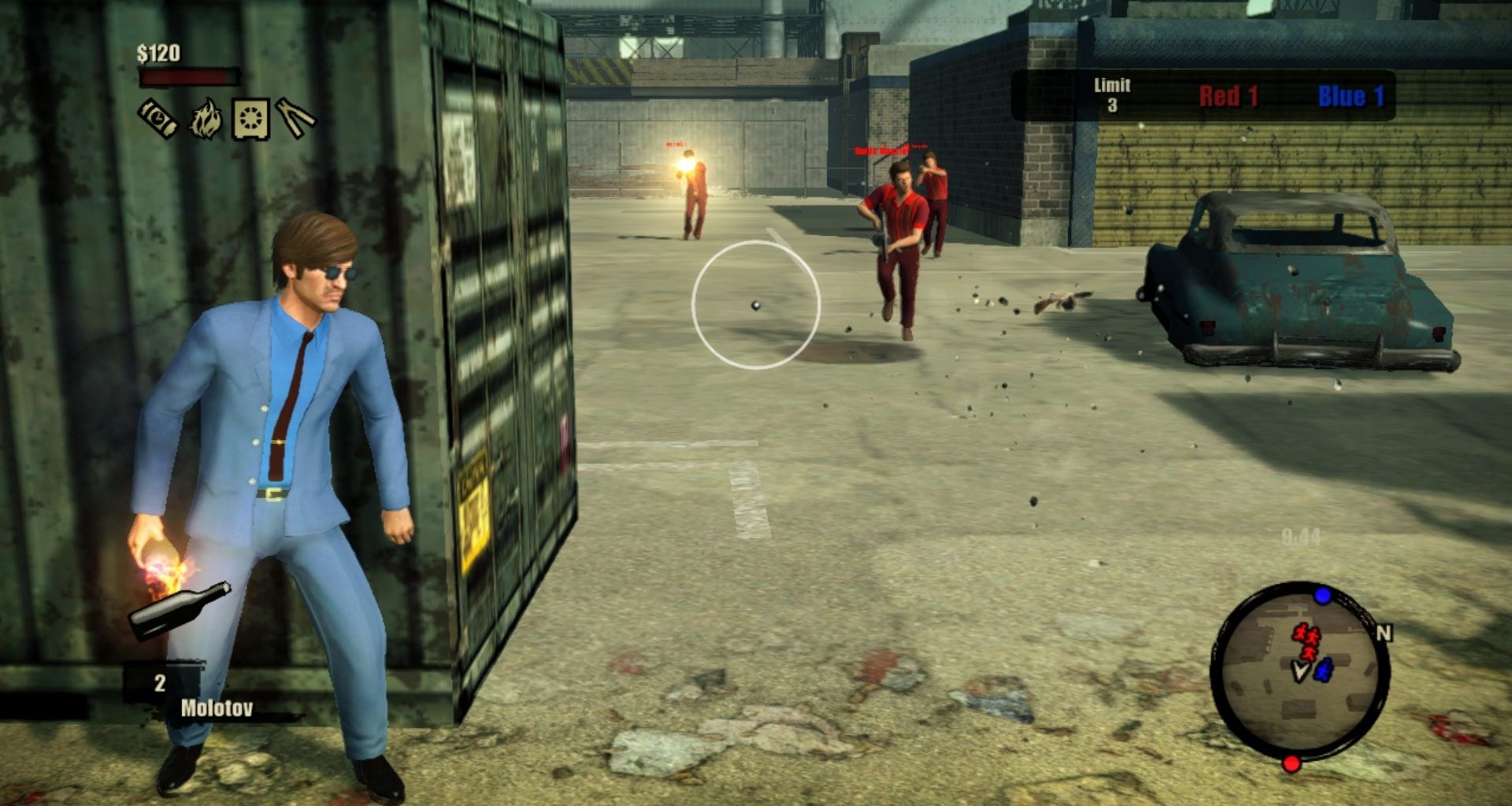 Firefighter. Astronaut. Policeman. These were all pretty stock-standard responses from kids when asked what they wanted to be when they grew up. However I’m pretty sure I wanted to be a Don – much to my primary teacher’s shock. Coppola’s trilogy of masterpieces portrayed a gritty, dark but overwhelmingly attractive view of the Mafia. There wouldn’t be many men alive who didn’t want to rush out and buy a black pin-striped fedora hat after seeing The Godfather series. So a video game that puts you into the black shiny leather shoes of the Corleone family again must be a winner, right?

The sequel to the original Godfather game that came out back in 2006 brings with it a mix of feelings. In many ways EA have improved the gameplay and features of the first title in appreciated ways. But there is something about the game that just doesn’t feel quite as polished as Sonny’s boots.

The Godfather II starts with an introduction that places you in Cuba back in 1958, four years since the first game. The Corleone family is looking to expand their empire and dodgy old Havana in the late 50’s is more than ripe for the taking. You are introduced to Dominic, who turns out to be an important member of the Corleone family despite the fact that you have never heard of him up until now. Regardless though, Michael Corleone (the current head of the family) has been impressed with your efforts and has appointed you, Dominic, to head up your own family and take control of Cuba.

Before you start however, you get to customise Dominic in appearance, including his facial features, body type and his choice of clothing. Admittedly, the customisation levels aren’t amazingly in-depth, often with basic presets followed by limited tweaking options for areas like the nose, eyes and mouth. Don’t expect to be able to give your character a green Mohawk or giant juju lips. But this limitation is there for a reason and ensures that your character stays within the theme of the 1950’s and looks like he belongs in the Mafia. So expect big square jaws, terrible moustaches, far right parted hair, wrinkles and bushy eyebrows galore.

However you can definitely take some time with the clothing options that include various wardrobes for casual, semi-formal and formal suit occasions. With a good variety of clothing items (ties, shirts, vests, blazers, hats, glasses) you’ll be able to cover up your ugly Mafia-mug in no time.

The opening gameplay sequences work as a fluid, well-implemented introduction to the game. On a warm evening in Cuba you accompany Michael Corleone to an aging Hyman Roth’s birthday party at his multi-million dollar estate. Roth, an extremely elderly but equally respected Jewish mob boss should be familiar to Godfather fans. His birthday party has brought together some of the area’s most powerful families and this is where you first get control of Dominic. By moving around the multi-storied mansion you will overhear random banter and mob-like dialogue. Walking up to characters and pressing Y you can then engage in conversation with them. While minor characters will simply utter a one-line response, the more central characters will give you the opportunity to interact by pressing a direction on the D-Pad according to what you would like to say. It’s nothing too in depth and possibly doesn’t add much in the way of gameplay. But the whole social scene and interconnectivity of the Mafia is portrayed nicely, allowing you to become part of a bigger story that Godfather fans will certainly appreciate. The characters are well voice-acted and the script includes some of the dark humour and wit that the movies shared.

Being promoted to a head of a family brings with it a large amount of responsibility. As one of the Corleone echelon it is up to you to take control of Cuba and to use its abundant supply of illicit resources to further the family’s cause back in the States. Unfortunately Cuba is already under siege by other organisations and your introduction to the fray creates a massive Mafia war between several families. The Almeidas family are Cuban natives led by a former rebel fighter who fought alongside Che Guevara in Fidel Castro’s Cuban revolution. The Granados family is led by Rico Granados, who made his bones through the real estate market in Miami, Florida. The Manganos family, led by Samuele Mangano, inherited the crime lifestyle from his father back in Siciliy. And finally the Rosato Brothers, who were both previously caporegimes (or captains) in the Corleone family empire before defecting to form their own.

In order to keep track of all of this, The Godfather II game introduces the Don’s View. By pressing the Start button you are greeted with a stylish 3D map that you can zoom in & out of and pan around to view the city from all angles. It contains icons indicating potential resources, territories, ownership by rivals or allies and even animations to depict what is going on in those areas. There are numerous ways to earn respect and money for the Corleone cause: prostitution and the adult industry, extortion, gun smuggling, construction, gambling, drugs, chop shops, robbery and taking out rival family operations around town. For example a nearby prostitution bracket would require you to storm into the brothel (either by yourself or with your crew) and locate and intimidate the owner. If the operation is owned by a rival family then you can expect to encounter some serious opposition once inside. Intimidating the owners and stomping your dominance around town is definitely one of the high-lights in the game. Introduced in the first title, this sequel features “Black Hand 2.0” – a control scheme that allows you to grab, knee, kick, and head-butt enemies into submission. It encourages you to be creative when intimidating others too, so try and break as much stuff as possible if you’re in a retail store. Feel free to knee-cap a shop keeper, or just throw a bar-keeper through a glass window. All of this increases your intimidation meter and potentially your earnings from their business once they submit. However be careful as too much forceful persuasion (ie: a bullet to the face or too many thrown glass bottles to the crotch) can lead to an early death and therefore no profit. Luckily the game expects you to overdo it every now and then (I threw one poor electronics store owner underneath a truck) so you always have the option to revisit the place and retry. This game is also R18 for a very good reason. It’s safe to say that if you don’t have a violent side to you then you won’t get very far in this game.

Controls and gameplay wise, it feels like a toned down GTA. Walking around the city is third person, allowing you to control the camera to take in your surroundings. You can jog and sprint, targeting can be manual or assisted and you can hijack cars by pressing Y. Being the late 50’s all of your surroundings are perfectly themed to suit, including some beautiful classic cars for you to cruise in. Unfortunately the handling of all of them is pretty poor, so expect to crush a couple of pedestrians with every corner. Too much carelessness can attract the attention of the police too, but to be honest the AI is so poor you can lose them almost immediately. Despite this though, the coppers can still cause some irritating delays when trying to storm a rival HQ or escort your crew from A to B.

This crew is literally like family so it pays to look after them. Sadly this is made a lot harder due to their stupidity and limited AI. But recruiting them offers a lot of reward. Firstly you have to find potential members scattered around town. These grow in numbers as you gain more notoriety and will appear in random places so it pays to revisit your pads around the place. Walking up to each recruit and talking to them informs you of their specialised skill and price-tag, allowing you to make the decision as to whether to take them onboard or not. Some deal with explosives (perfect for distractions or forced entry), some are expert lock-pickers or safe crackers, some are skilled street fighters and so on. Initially you will need to be selective as to what recruits you have, but with enough time you will have an impressive array of colourful characters ready for any mission.

With such a large city to control, your family will also play a huge part in overseeing it. Obviously you can’t be everywhere at once and as your empire expands, rival organisations will attempt to take back areas or your sources of income. You have the option of racing back and trying to defend it, or better yet placing guards (at a cost) to hold the fort for you. You also have the choice of positioning your best man from your crew at a particular desired locale – but of course you can’t then use this person for a mission. It’s this element of strategy and boardgame-like gameplay of allocating resources via your Don’s View that adds value to The Godfather II. Furthermore, specialising in a type of resource, for example gun smuggling, brings its own advantages as well. If you manage to take over all of the arms rackets in town (usually there are three of each type in town) then you will earn larger amounts of money and get bonus benefits such as bullet-proof vests for your crew. Dominating the illegal chop shop industry will give you access to an armoured car and so fourth. Ideally you will want to take over every illicit source of income but you may need to consider what is most accessible with your crew as you start out. Remember also that rival families will want to prevent you from taking control at all costs that can include some dirty tactics and extreme measures.

Graphically the game is fairly average. Few improvements have been made since the first title in 2006, but explosions, particle effects and character animations still hold up against bigger titles. The level of detail seems to be extremely variable though, with some rooms being packed with items, wall hangings and authentic aesthetics whilst other areas seem extremely plain and uninteresting. In the right areas though, the textures and lighting are reminiscent of the visual tones that made the movies dramatically intense.

In the end, The Godfather II has the recipe for an excellent game filled with action, mindless violence, great characters and strategic thought. But you just can’t help but shake the feeling that it doesn’t quite feel 100% finished. Sometimes when your team-mate (that cost you handsomely for his employment) starts running into a table repeatedly, or a car refuses to stay on the road despite your best efforts behind the wheel – you can’t help but think “why didn’t they tweak this during development?” Thankfully though, these quirks aren’t enough to stop you enjoying the main bulk of the game. Recommended to Coppola fans and those who enjoy using golf clubs when not playing golf.