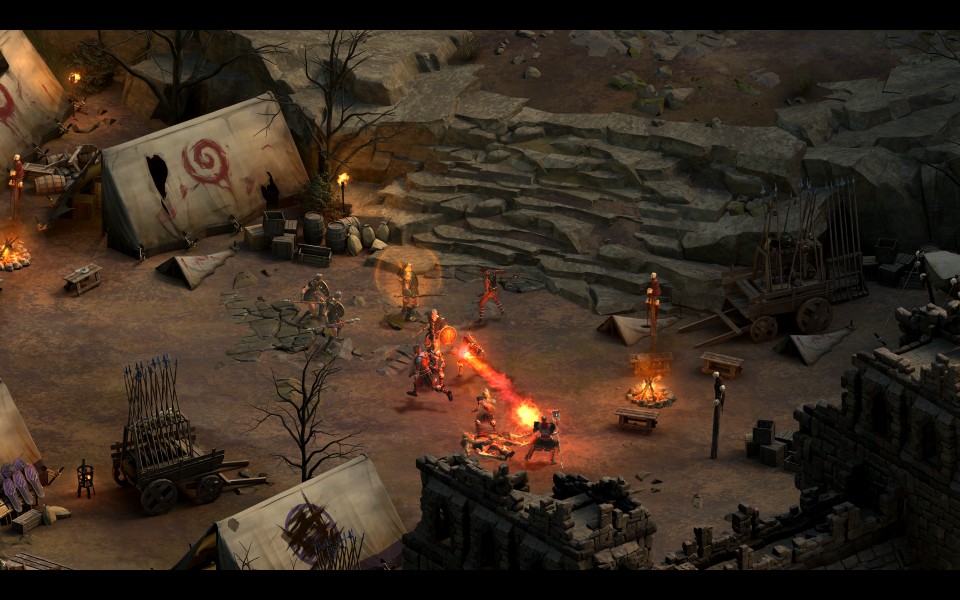 That’s Tyranny’s tagline. It’s a strong one, but it’s also inaccurate. It makes sense in a world where light and dark are in contention, but by the time you load into the high fantasy world of Terratus, things are so heavily skewed in evil’s favour that the classic conflict doesn’t mean much. On the outset Tyranny sounds exhausting – another Game of Thrones or The Walking Dead, where we’re told “No, we’re the real monsters!” ad infinitum.

Tyranny is much more than that.

The latest RPG from Obsidian is a throwback to Infinity Engine games of yore, with a lavish presentation, deep combat, and a story filled to the brim with choice-and-consequence. Players take the role of a Fatebinder – an extension of Overlord Kyros’ will, playing judge, jury, and executioner all in one.

Your interactions with the game’s many factions will range from peacekeeper to mass-murderer, but they’re never in service of proselytising or admonishing the flawed human condition. Tyranny tells a tale where the moral spectrum that you know of doesn’t exist – not because good people do bad things, or bad people could be doing good things. It explores how we accept monstrous actions as part of something organised, and bigger than ourselves. It’s confrontational, and it prides itself on being so.

Character creation is a little more streamlined from the developer’s previous effort Pillars of Eternity. You don’t pick a species nor a class, but instead choose a weapon or type of magic to specialise in. From there, you pick stats and skills. Like its older brother, Tyranny prides itself on making most builds viable. You’ll still need to think critically about how you level up and distribute your points, but you can strategize your way through encounters without statistics being the sole fulcrum for your success.

But by far the most interesting part of character gen is Conquest mode. With this you set up the state of the world, choosing the conflicts that your character engaged in before the start of the game, and how they resolved them. Small model armies are pushed across a table, while cities and institutions rise and fall into the map they rest on. Some of the choices are especially harrowing upfront, and perfectly set the tone for the rest of the game.

Your actions in Conquest also determine how major factions respond to you, as well as smallfolk. In my first run through, I called down a catastrophic magical curse on an institution of free-speech and knowledge, burning it to the ground. From then on people I interacted with would acknowledge that, and gave me a fitting nickname to boot. Your character starts the game in a high-ranking position of power, and Conquest helps make that feel apparent from the start, escaping the usual RPG tropes of “go kill some rats in a basement, because you’re level 1.”

Combat encounters lend heavily from Pillars of Eternity. You’ll pause constantly to position units, line up spells, and set up flanks, only to un-pause and watch it all play out. New however are team-up attacks, which trigger depending on what companion you’re with, and your standing with them. Instil a sense of fear or loyalty in them via dialogue, and you’ll get different skills accordingly.

One of the game’s largest stumbling blocks, however, is its NPC interactions. Outside of most them fearing for their lives if they don’t listen to you, their motivations for joining you on your quest are at times a little unbelievable. A lot of this is can be forgiven however due to the quality of writing. Dialogue is sharp and witty, and the way that characters chime up during key conversations lends each one a personality all their own.

That writing also extends to the description of events. Moments that could have been shooed away with short character animations are instead given sickening detail – something which seems wholly perverse, and wrong coming out of an Infinity Engine-styled text box. Games like Icewind Dale and Baldur’s Gate 2 could get dark, but they never-once described what a character’s brain-matter looked like splattered against a wall. That juxtaposition all the more reinforces the game’s setting.

Tyranny is a tale about evil, but not as you know it. It sidesteps the predictable tropes of grayscale morality by shifting the spectrum entirely. The first few hours of the game are spent in disgust, but by the end you’ll become numb to your actions; evil becomes banal, terror and violence normalized. You’re not a moustachioed villain, as you so often are in games with morality meters – you’re a bureaucrat. And it’s terrifying.