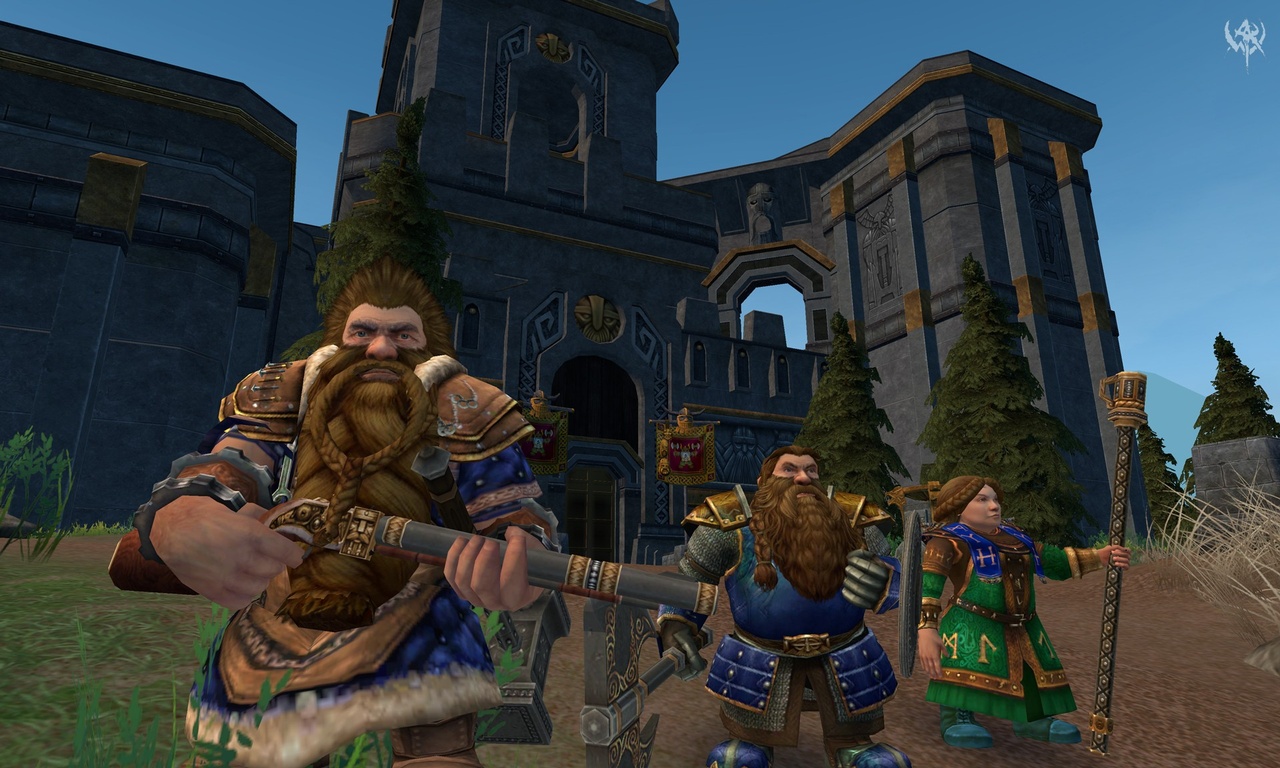 Most online RPGs begin with the individual deciding what they want their character to be, look like, and do. Character creation in WAR starts out with the player choosing a side they want to fight for. The Order side consists of the Dwarfs, Empire, and the High Elves, all of which can be slotted into the ‘good guys’ category. On the opposing faction of Destruction players can choose from the three races: Greenskins, Chaos, and the Dark Elves. Each race has a minimum of three classes and a maximum of four. Classes are race specific but can be split up into four basic groups.

These groups consist of melee damager, ranged damager, tanks, and healers. Each race usually contains a healer, a tank, and a damager whether it be melee or ranged. Melee damage consists of players needing to be right up in their enemy’s face to dish out some pretty serious damage. Ranged damagers sit far back from their targets and deal moderate amounts of damage. Some ranged damagers even have the option of setting a pet, or a turret on their enemy. Tanks are incapable of doing large amounts of damage but excel in taking punishment. A tank can usually be found on the front line taking a pounding instead of the beating being laid upon their weaker companions. Finally, healers are one of the most crucial and important classes in the game. A group with a healer has double the survivability than a group that has the extra tanking or damaging capabilities. After selecting a side, race, then class players may then customize certain traits of their chosen character.

Character customization in WAR is very detailed and exciting to play around with. Players can customize a character depending on race. Greenskins can have different kind of teeth, jewelery, and jaw structures. Empire can choose hairstyles, face types, skin and hair colour, even scars. The Chaos race can even choose what tattoos and eye colour they want. This deeper dive into character customization means that each individual in the game looks very diverse compared to other players’ characters. There may be the argument that character customization makes no difference since the skin and face eventually gets covered up by armour however there is even customization options for a players armour. If the item is capable of being dyed the player can simply stroll up to a merchant and request to have their armour dyed. There are around twenty different colours to choose from the vendor and dye can be applied to separate pieces of armour or simply applied to all parts. This results in even low-level characters looking as awesome as the All-Blacks.

The combat system in WAR is nothing revolutionary yet it has done away with a classic reservoir of power – mana. Unlike most role-playing games where mana is used by most classes of fighter WAR relies on the AP system or ‘Action Points’. Action points are fast-recharging pools of power that are used when an ability is activated. Players all have the same amount of AP but different abilities cost different amounts and certain buffs and debuffs can also affect your Action Points. Thanks to the fast recharge-rate of the AP, players can unleash ability after ability in combat without having to concern themselves with Mana management creating a skill-based environment for Player versus Player encounters.

In the first stages of playing the game all characters start out in a race based zone. The zones are also split up into chapters and levels are split up into tiers. In each zone there is around four chapters to complete. Upon entering a zone dedicated to a chapter players will find an associated campsite and ‘Public Quest’. Campsites contain NPCs that serve you as ability trainers, trade skill trainers, rally points, quest starters, and vendors. After stopping off in a campsite and picking up a few quests players can join with fellow companions to complete the chapter’s Public Quest (PQ for short). PQ’s are designed to gather players together in the world environment to complete a challenge that would be impossible alone. PQ’s are much like dungeon runs or instances in the sense that powerful items can be obtained through teamwork however they are not in separate areas from the world environment and are split up into stages. Stage one for a Public Quest usually consists of killing large amounts of weaker enemies. Stage two is a timed objective where players either kill mini-boss characters or activate objectives around the PQ. Then finally stage three will be the boss of the Public Quest who will take a lot of skill and teamwork to take down.

After eliminating the final boss of the PQ players are put onto a contribution table. A contribution table for a PQ displays players as a rank out of ten. Players are ranked depending on how well they assisted the group in taking the boss down. This may mean damage dealt for the ‘DPS’ classes, damage taken and hate (or aggro) gathered for tanks, and healing and buffs done by the healers. This means that no matter what class players select they will all have equal opportunity to strut their stuff. Ranking on the contribution table effects their final roll for the loot chest that is dropped form the boss. A top contribution table ranking will give players a +500 bonus to their roll where as players on the bottom may only receive a +95 bonus. These loot chests contain ‘loot bags’ that are ranged from lesser to epic and also contain about seven different items of which players choose one. A drop chest may contain six lesser loot bags and one rare loot bag meaning that a player with the highest roll gets a greater award than their unluckier counter-parts, however it also means that more players get an opportunity to receive an item. Even if a player is unlucky and does not receive a high enough roll to receive a loot bag they will be given a bonus to their roll the next time they do a PQ. This loot system results in everyone getting a fair chance to receive a powerful item regardless of class or luck.

Talents, spells, and passive abilities in WAR have been split up into multiple sections to break up the monotony of simply pressing the keys 1 through to 9. As a player levels up their XP from doing quests, killing mobs and even by slaughtering other players (which also yields ‘Renown’) they of course level up. Leveling up gives an automatic increase to base stats (health, strength, etc.) as well as the right to purchase new spells every one or two levels. Upon reaching level 11 players start to receive points in which they can choose where to place. Every class has three different ability trees or ‘Paths’ to which they can rank up. Each path has a specific role in the development of the character but it also forms the character into a specific field. For example the ‘Marauder’ class has three paths – The Path of Savagery, The Path of Brutality, and The Path of Monstrosity. Selecting the savagery path will increase that characters effectiveness using spells that fall under that ability tree and may also yield bonuses to base stats. This is likewise for the other paths however each path has it’s own strengths and weaknesses.

As well as gaining new spells which can be added to a hotbar players also receive spells that are passive or activated using ‘Morale’. Passive spells are known as ‘Tactics’ and are added to the tactics bar which can have up to three separate tactics loaded onto it at once. Certain situations can activate these passive abilities such as landing a critical strike or being hit for a certain amount of damage. Tactics can also be swapped around ten seconds after combat meaning that players can alter the use of their character on the go. Morale abilities are activated when a player reaches a certain combat threshold. Fighting creatures or other players, taking damage, or being near a fight increases a players Morale. Once their Morale has reached a certain checkpoint they can activate a powerful spell. There are around three slots on a players Morale bar for spells meaning they can activate a lesser spell using a smaller amount of Morale or wait until it is built up to unleash an even more devastating spell.

WAR is very outstanding in the realm of PvE (Player versus Environment) but its real strength shines in Player vs. Player combat. The two opposing factions of Order and Destruction are constantly at each others throats. Certain objectives out in the world can be captured for either faction – holding the majority of the objectives in a zone gives a bonus to that faction. Not only can objectives be captured, players can team up to take over a keep if it has fallen into enemy hand. A keep is a world objective however it is much more difficult to overturn if it is in enemy hands. Players can set up cannons and battering rams to aid with taking over a keep or purchase war machines such as hot oil cauldrons to defend it. Grabbing a few guild mates or setting up a massive raid to capture a keep is incredibly fun and usually attracts the attention of the opposing faction – which results in a massive war.

Purchasing the game and getting started with a timecard is quite expensive but sets you up with roughly three months worth of playtime. Timecards are also $10 cheaper than most other timecards, at $20 a month it does not seem so bad for such a great title. The other bonus for us Kiwi’s is the fact that the Oceanic servers are actually in Oceania, this means that disconnections and lag spikes rarely occur. If you are enticed by what Warhammer Online has to offer and you are ready to pick servers it is highly recommended you jump onto the ‘Darklands’ server as that is where most New Zealanders have landed. As a whole Warhammer Online is a fantastic addition to the online role-playing game section and is well worth the time and the money.