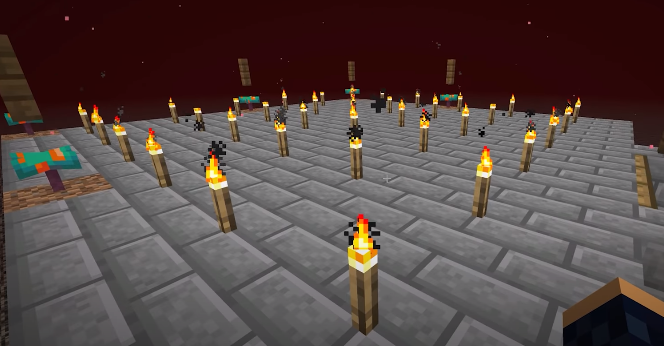 In this guide, you will learn the methods to develop Nether Farms in the Minecraft game.

Blaze drop you blaze rods which can be useful when brewing potions or trying to find the stronghold.

Bring these things out of the shulker box and add them into inventory to use them.

So first of all we will have to find a blaze spawner and have to light up everything around it, so the blazes won’t spawn.

We are also using night potions, so it is a bit easier to show you the build. That is why the nether looks so red. Start with the farm by digging down seven blocks beside the spawner.

Now go under the spawner, make a 4*4 square and leave the middle empty. We are using glass as a building block but you can use any block of your choice. Make sure the spawner is above the empty space in the middle.

Now build out three blocks from each side. Now connect the sides and fill in the gaps.

Then make a border around the platform.

Now build all the corners up by ten blocks.

Now fill in all sides with glass building blocks.

Go under the farm now and make some space for the collection and killing area.

Put down your collection chest first.

And then add four hoppers running into it.

Now just add the slabs and the killing area is almost done.

Now go back up in the farm using temporary blocks. Add some vines in that empty hole so that blazes stay at the bottom

Now go up the spawner and start breaking the glowstone.

Also add a slab on top of the spawner.

Now come out of the farm and add lava in each of the corners.

Move around the farm using temporary blocks to add lava in every corner of the farm.

Now time to AFK in the farm for thirty minutes and then look for the results after.

After 30 minutes you will get over nine stacks of blaze rods in 30 minutes. We also used a looting III sword.

The next build, in the nether is basalt farm. Basalt can be used as a decorative or temporary block. It is a block with highly blast resistance.

Bring out these things from the shulker box and add them in inventory to use in making of the farm.

Start by placing down two chests. Then add two hoppers running into the chests.

Place two rails on top of the hoppers.

Add blocks to both ends so the minecarts would not slide off.

Now place one block in front for the easier access to the farm.

Place two soul soil on top of the minecarts

Now add some blocks around the soul soil.

Add another layer of blocks around soul soil but leave a space for the lava also.

Now the last step is to add lava and then your farm is done.

After adding lava block the gap with a block

Now just stand near that block and keep mining for some time.

If you want to AFK the farm, hold down the left click and press F3+T.

When you see the screen shown below, release the left click.

Now your left key is auto holding and you can AFK the farm. Unenchanted diamond pickaxe will last 15 minutes, so it is highly recommended using an unbreaking III pickaxe. If you AFK it for thirty minutes, you may get over 1650 basalt blocks. Keep in mind we were using regular diamond pickaxes. It may vary for different pickaxes.

The final build in nether is hoglin farm. It is a very good farm to get tons of food and leathers. To make this farm first you need to find the crimson forest biome. It is the biome in nether with red trees. This is also the place where you can find the warped fungus mushrooms.

They can also be grown using bone meal in this biome.

You will need to get to the nether roof, above the crimson forest biome.

Dig up until you get to bedrock.

Then press F3 and find a bedrock block that says 127 as the targeted block height.

To get to the nether roof you will need to climb up, using ladders and then throw an ender pearl. Throw it right in the corner.

Now you are on the roof, make a nether portal here.

This will make it very easy to come back.

Now begin to build a farm.

Bring out these things from the shulker box and put them in inventory to use them later in making the farm.

Press F3 and check that the build is in Crimson Forest BIome. If it is then continue making farm.

Start by leaving a 4 block tall gap from base.

Place a building block on top of it. Then make it to a 13*13 block square platform.

Then fill in the gap, quickly

Replace five building blocks with dust blocks as shown on the schematic.

On top of each dirt block, place a warped fungus and a fence.

On the other side of the warped fungus add four building blocks facing nether portal as shown.

On the back side of those, add a three blocks high temporary wall

Then add six trapdoors over this wall. And add three more opposite to the wall

Then place slabs on these blocks. After that place down the fences beside the building blocks.

Now go down below the platform

Now make the storage area by placing two chests under the side two blocks, then four more chests below it.

Connect the chests with hoppers.

Then add six more hoppers below the hole all pointing to the chests.

On the back side of the hole, add three more slabs. 2 bottom slabs on the top blocks and one using a temporary block. This way the hoaglins think they can run off the platform

Now add trapdoors on all the hoppers in the main hole.

Then add lava on top of the trap doors.

Now light up the whole platform, leaving only one block gap between each torch to make this area fully brighten.

Now make the AFK spot. Do that by building 90 blocks up from the side of the farm. Use temporary blocks to elevate yourself up and also add ladders so you can get up there later also.

When you get up there, make yourself a platform to AFK on. Add four building blocks at top. Make sure your Y value is 229 when on the platform.

Your hoglin farm is done.

In a few moments there will be hoglins spawning and running into the lava because they are scared of those mushrooms.

Remain AFK for about thirty minutes to check the results.

If you don’t have an elytra use ladders as we used before. Go down and open the chests to check what they have got.

Results are about 852 cooked pork chop, 126 leathers, means you may get about 1700 porkchop and over 250 leathers after an hour of AFKing. 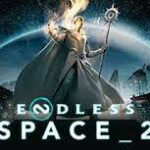 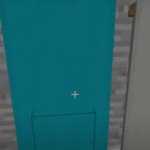 How To Make Cyan Banner