Released in Japan close to 2 years ago, Mobius Final Fantasy is finally available to rest of the world in August 2016, and is now playable on PC via Steam on February 6 this year. With how the Worldwide server slowly but surely catching up with its Japanese counterpart, it’s time for us to take a look at some of the new job additions to the game since our last write-up.

Note: this article contains information from both Global and Japanese version of the game.

For Wol, there are 4 main classes:

1) Warrior. The most balanced among all job classes in terms of overall stats. Also has high ATK and DEF.

4) Monk. (Japan Only) High ATK and Break Power, varying DEF by card, and generally low MAG. Some may have dual class, allowing them to equip ability cards of another class besides Monk.

Do note that the above-mentioned are generic stat descriptions by class categories only. Specifications may vary across the respective cards.

Legend Job is a sub-category first introduced with the release of the Tidus skin, Ace Striker, for the Final Fantasy X-2 Gacha Event after the international launch of the game for mobile phones. The Cloud skin, Soldier 1st Class, is released with the launch of the Windows port via Steam globally, and for the crossover collaboration event with Final Fantasy VII Remake, “Eclipse Contact””.

Legend Jobs are generally stronger than normal jobs, and most are only obtainable via gachas during specific event periods in the Japanese version.

However, good news to the Global players: both Soldier 1st Class and Ace Striker are now available for grabs – permanently – in the Greater Card Summon, at a low probability.

But… which Wol Job is the best among all?

All jobs have their own strengths and weaknesses, so technically there isn’t only one “Best Job”. However, there are a few tips to help you bring out the greatest potential of the various jobs:

1) Strategy. Unlike most conventional RPGs where you can rely on grinding to clear high-level quests, Mobius Final Fantasy sets itself apart and raise the learning curve with separate leveling systems for the player and the decks. You’ll have to take a more tactical approach towards this game, especially in the tougher quests and regions.

3) Custom Skills. (Japan Only) You can obtain job-specific custom skill cards to further boost your job stats through the “Hall of Fame” region. Common custom skills can be obtained through the Skill Gacha in the Shop menu. Skills include raising base stats, increasing elemental attack power or defense, even helping you to farm more gils and EXP.

4) Preference. Even you, the player, may have your own strengths and weaknesses too. Some players are more inclined to the balanced Warrior jobs, while others may favor the more critical Ranger class, et cetera.

With that, now let’s take a look at the current rankings of the Wol Jobs released so far. 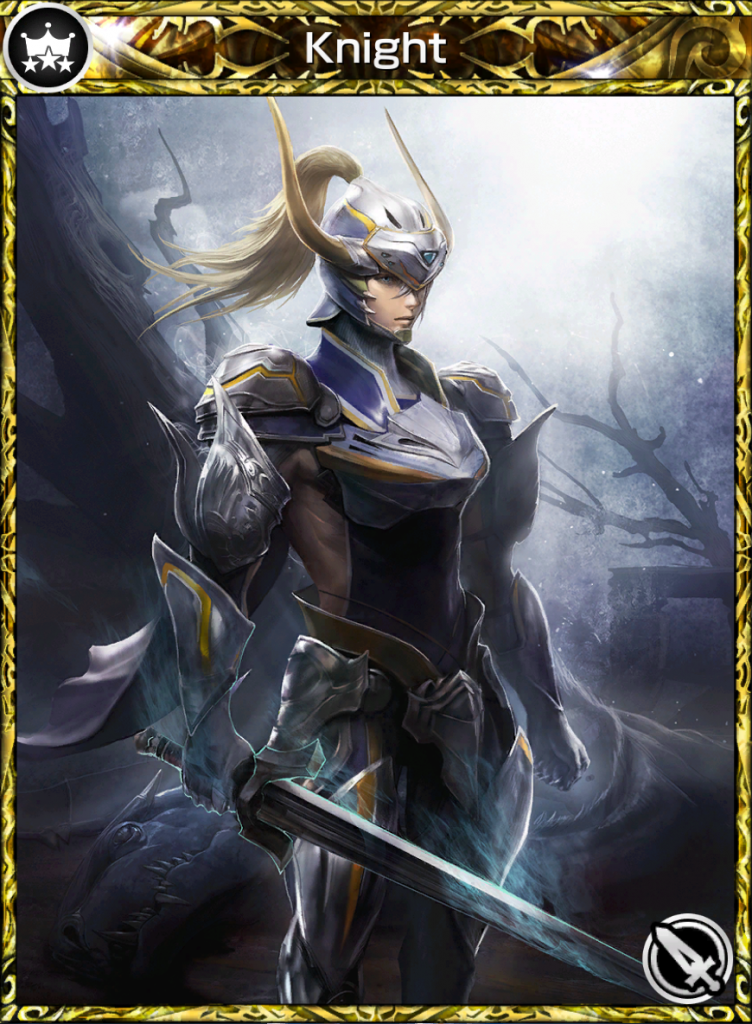 Once equipped with job-specific Custom Skills, the Knight class easily takes the first spot in terms of overall DEF stat, and hence the only one in the SS tier. Recommended for Battle Tower players who are aiming for the top.

For Global players, even without the Custom Skill option, the Knight class still tops all other jobs with his base HP and DEF stat.

2) Rise Guard. This custom auto ability allows the Knight class to raise his DEF by 5% every time he takes damage. Very handy when you’re up against a large number of monsters – you can easily raise the DEF by a whopping 30% in just one turn against 6 of them!

3) Battle Tower Friendly. With his exceptionally high defense, the Knight class is ideal for the increasing difficulty in Battle Tower events as you climb the level ladder.

The downside to this class is the low ATK power, so assembling the right deck of ability cards and planning your strategy wisely can help to maximize the high HP and DEF capabilities of the Knight card. 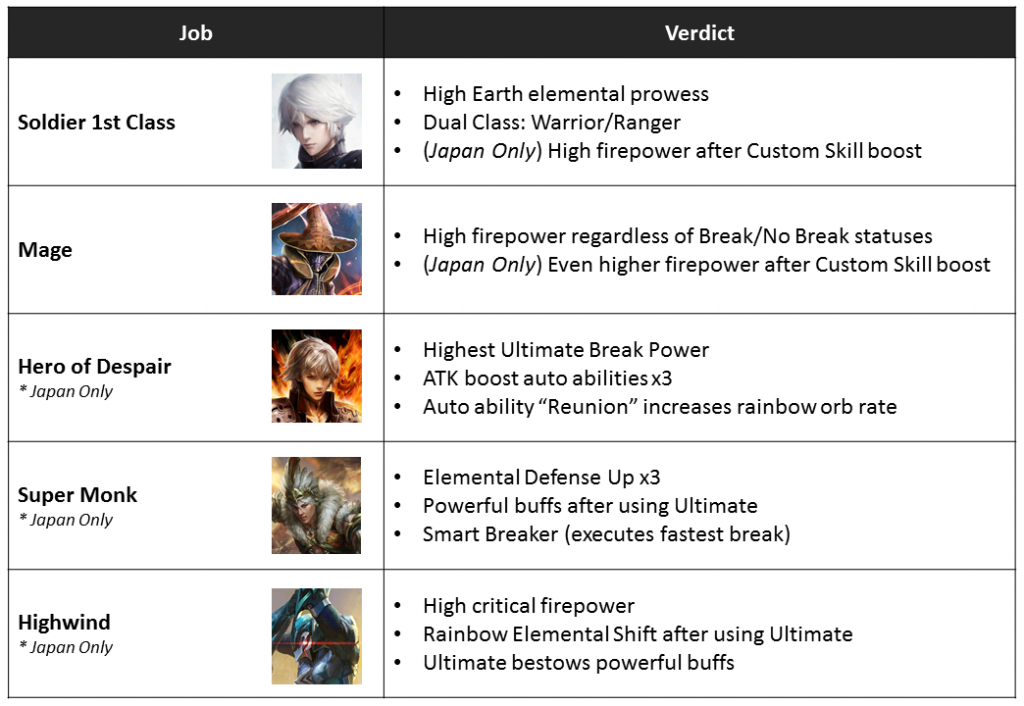 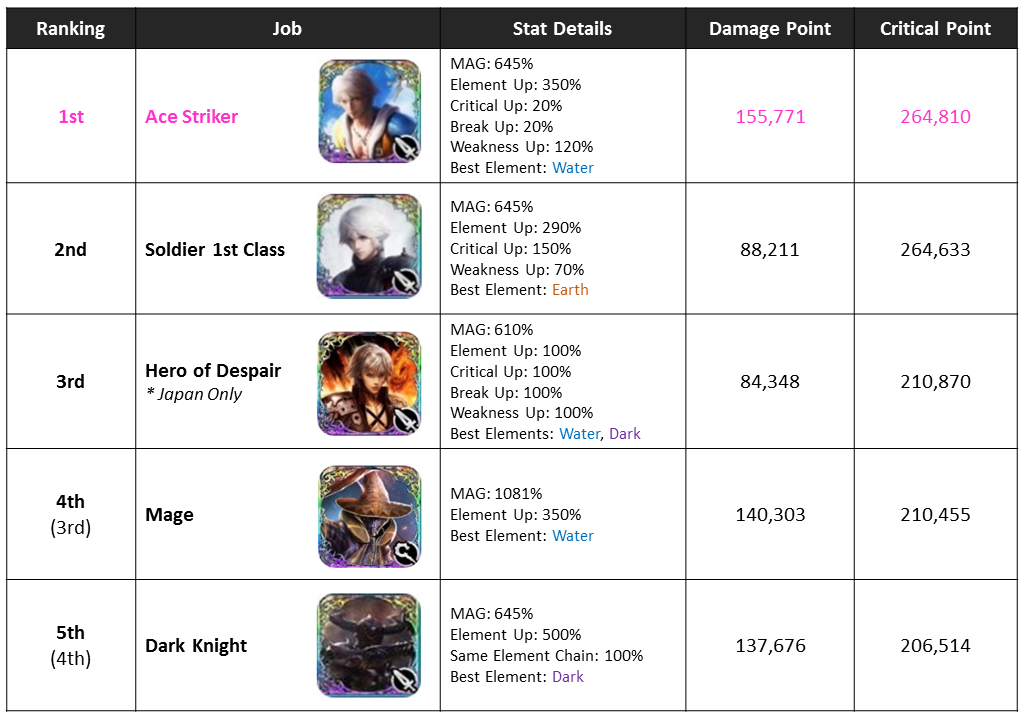 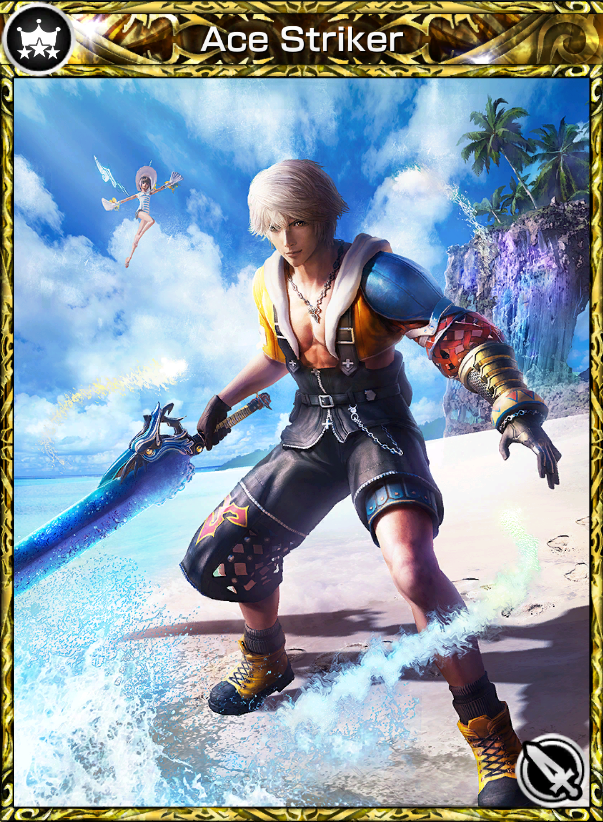 Tidus Wol takes the top spot as the job that can inflict the highest overall damage point on his foes. Here are the reasons why:

1) Dual Class: Warrior/Mage. Unlocking all of Ace Striker’s skill panels grants him the extra skill “Mage Lore”, which enables him to equip Mage ability cards on top of Warrior ones, creating more flexibility with your deck setup.

2) Highest MAG among All Warrior Jobs. Although placed second in the Japanese version, there’s no doubt that his MAG stat is useful to increase the damage you can deal towards your enemies using your deck abilities. It can help you to raise your total damage point, especially if you’re trying to climb higher on the weekly ranking ladder.

3) Ace of Water. He boasts the highest water elemental stat among all jobs at 350% in the Japanese version, making him an ideal job against Fire-type enemies, and Sicarius such as Ifrit. In the Global version, he has a 100% boost in both Water and Wind.

4) All-Rounder. Ace Striker has pretty balanced power stat in both his Warrior and Mage capabilities, though his Mage damage is slightly higher when exploiting elemental weaknesses.

5) Beginner Friendly. With auto abilities “Healing Victory +10%” and “Avert Action Loss +100%”, and buffs such as Barrier (increases DEF), Haste (increases number of moves per turn for set number of times), and Snipe (increases Critical Rate) when he’s in a pinch, he does have a decent sustainability in tougher battles for beginners and low-level players compared to the other basic jobs.

However, Ace Striker isn’t without some weaknesses. Among his elemental combination (Water, Wind, Fire), he is weakest in Fire – and he has no fire-based auto abilities to aid him, or even defend himself against it. This can be resolved by equipping him with Custom Skills in the Japanese version, but the Global players can only rely on using Elemental Drive in-battle in the meantime.

His sustainability is one of the lowest among all Legend Jobs, and it doesn’t help that his HP pool is quite low without Custom Skill boost. For Global players, make sure to have a healing support card in his deck in case the battle drags out. 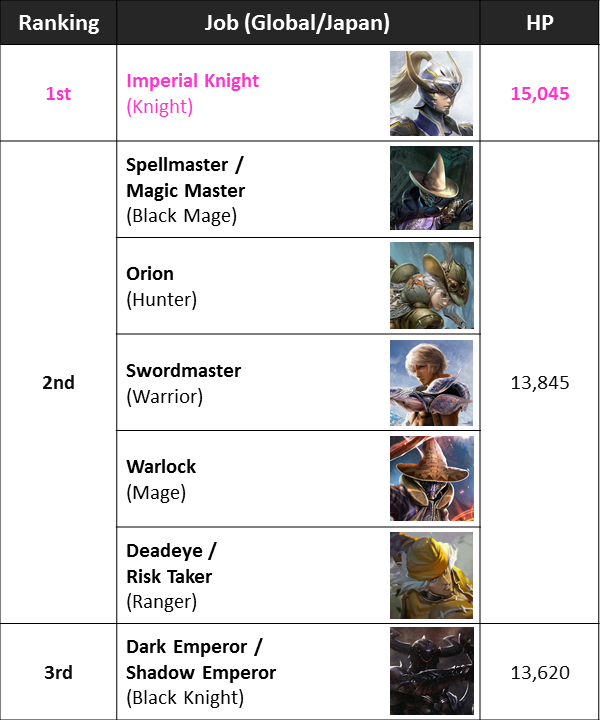 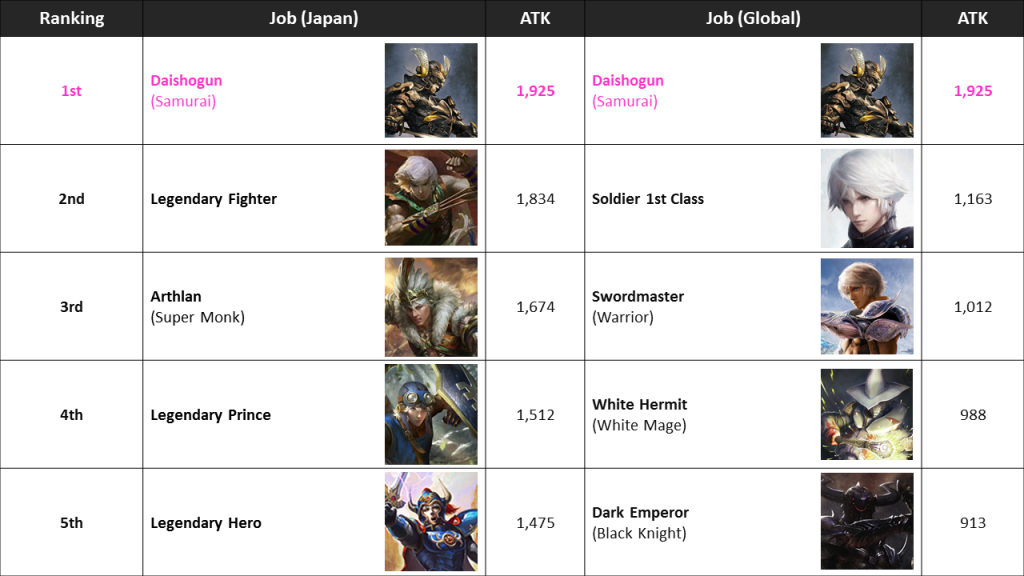 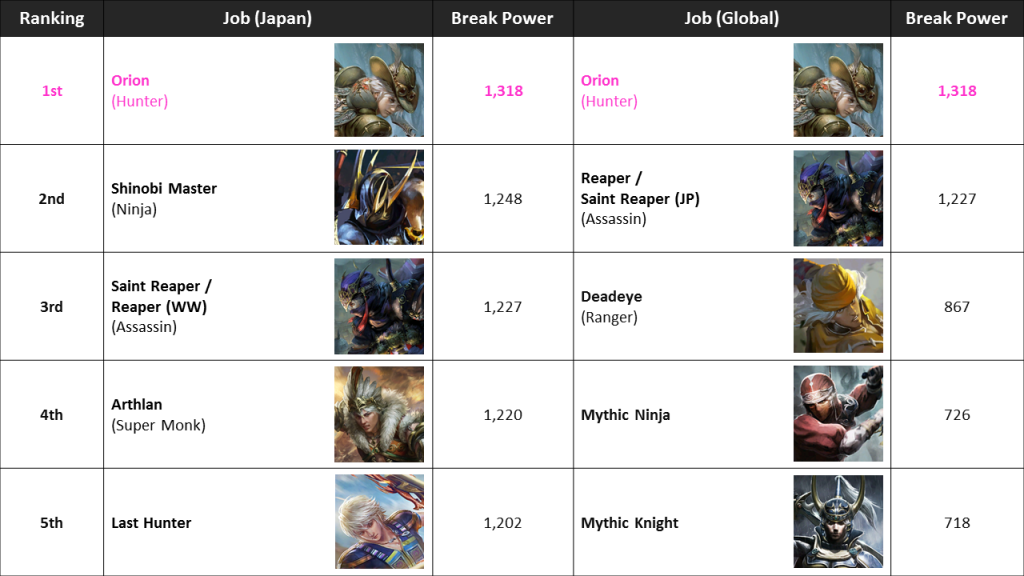 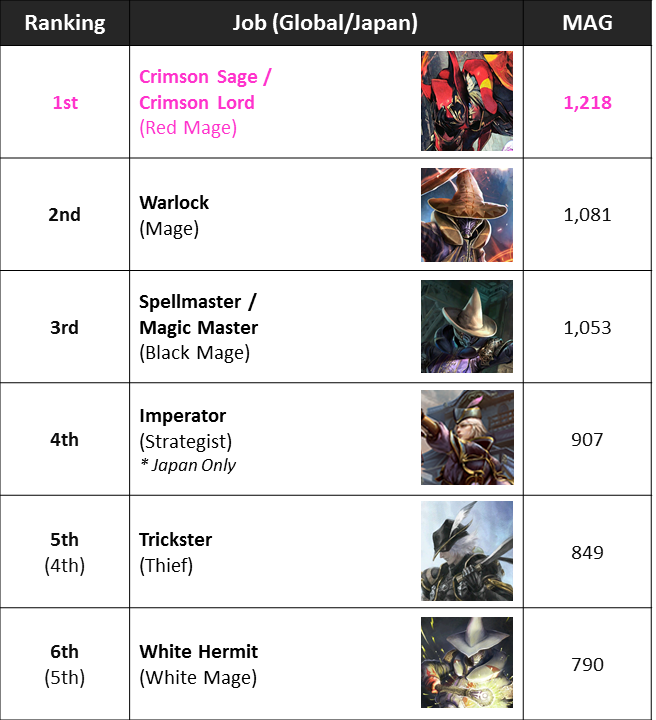 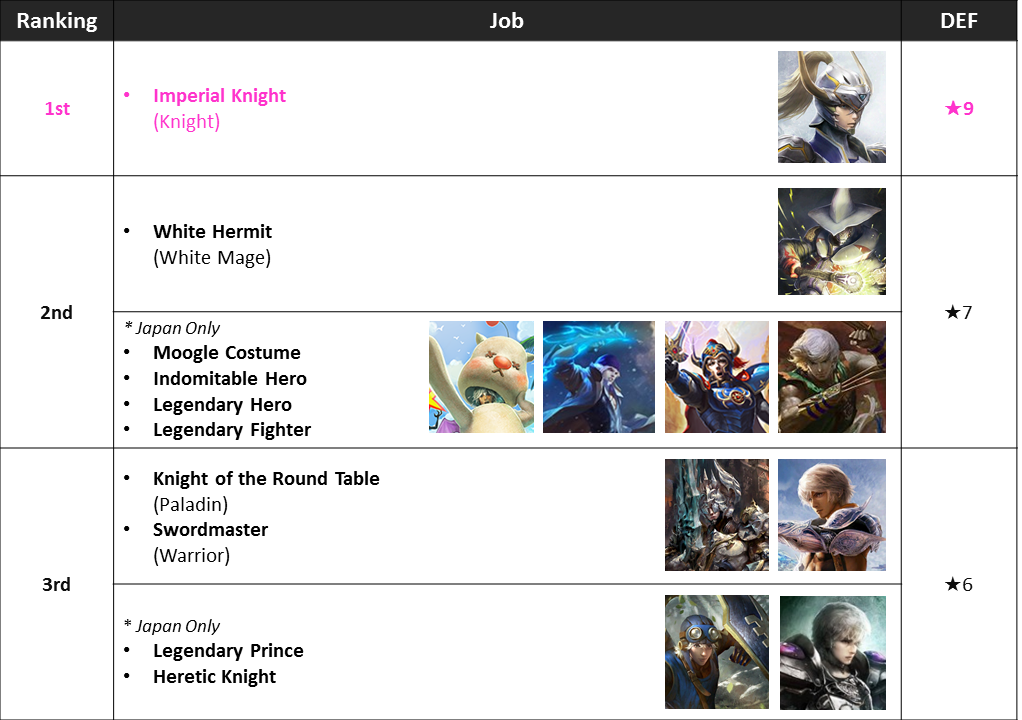 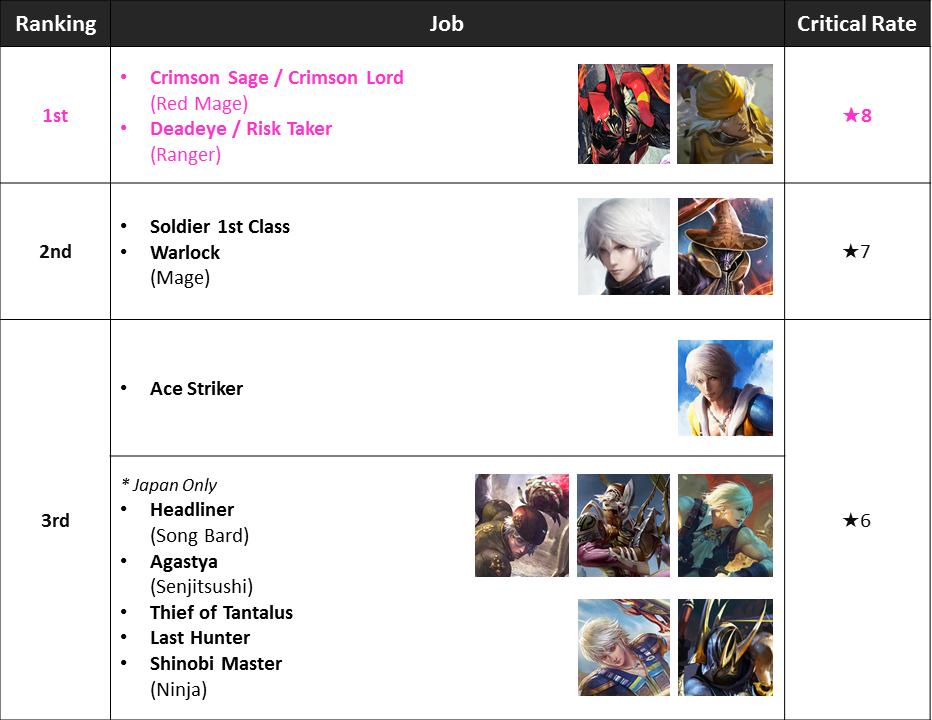 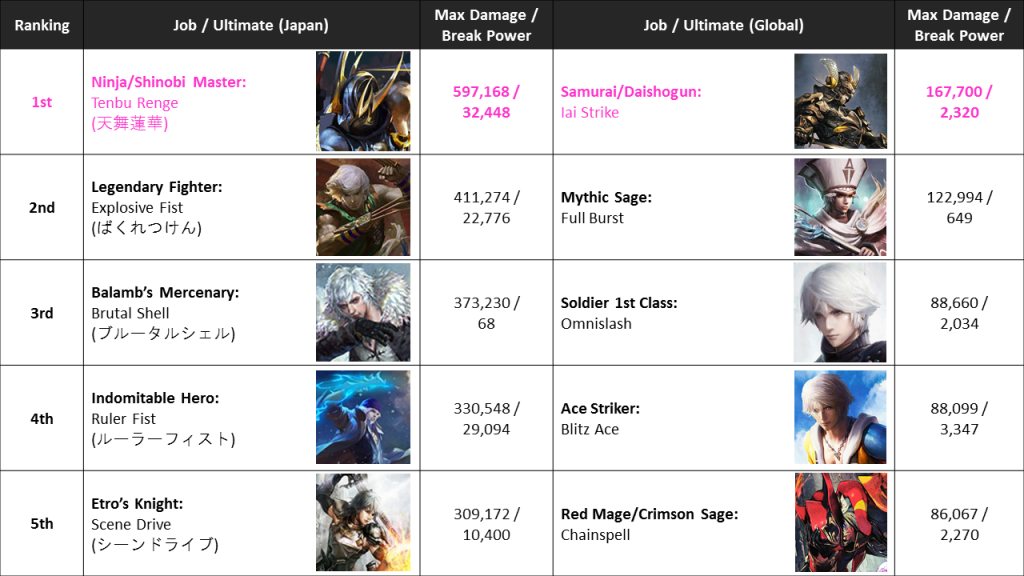 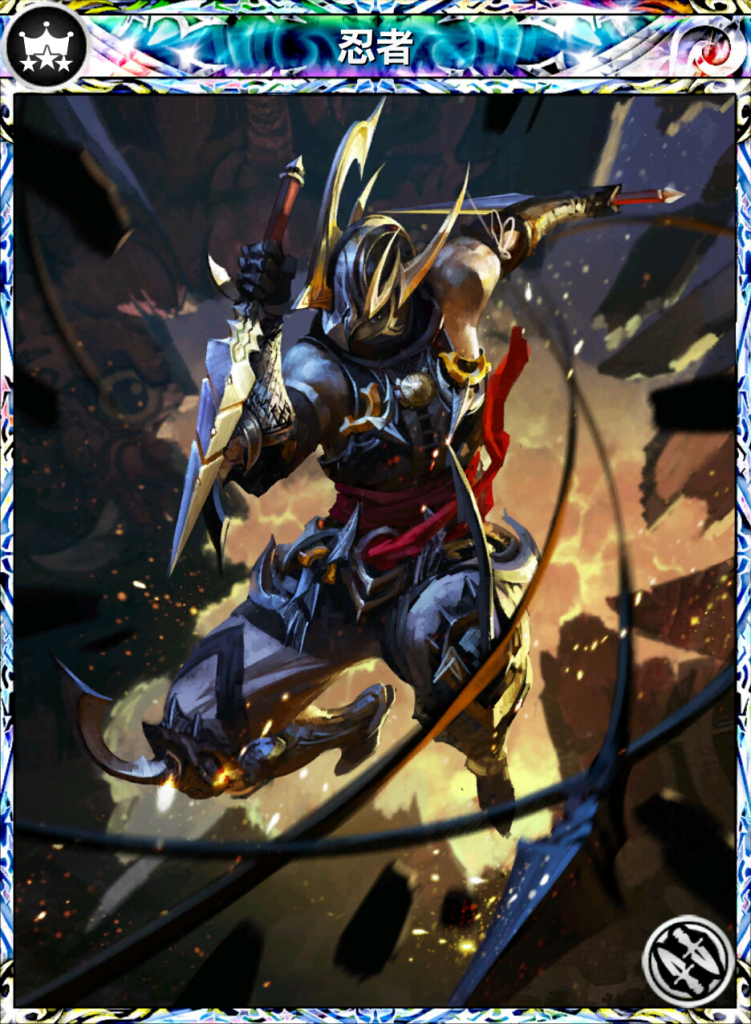 Ninja tops the list in the Japanese ranking, and here’s a breakdown of this job card:

1) Highest Critical Rate among All Ranger Jobs. Even without any Custom Skills boost, Ninja already has a basic Critical Rate at ★6. Together with the auto ability “Critical Damage Up +250%”, it can help to further increase his damage points when you use his normal attacks. Extremely useful whenever you run out of elemental orbs, innit?

2) Most Powerful Ultimate Ability. This is the main reason why he takes the first place for this category. “Tenbu Renge” executes a whopping number of 31 hits on your enemy when it’s used; together with his high critical rate, it’s a beautiful yet deadly sight to behold as he breaks your opponent in a flash – living up to his name. What’s more, he bestows Rainbow Elemental Shift (changes all your existing elemental orbs to rainbow orbs) after you use his Ultimate, allowing you to continue the deadly chain with a series of ability barrages.

3) Cactuar’s Nemesis. Making good use of the first two points in the Gigantuar region helps you to double (or even triple) your high score, allowing you to farm skillseeds at a much faster rate!

On the flipside, Ninja has a pretty low DEF stat which lowers his sustainability in longer battles, making him undesirable for Battle Tower events or even Sicarius battle at difficulty levels 4 and 5. Also, even though he has dual roles (Attacker/Breaker) in Multiplayer mode, his ATK stat is not as high as most other Attacker jobs. 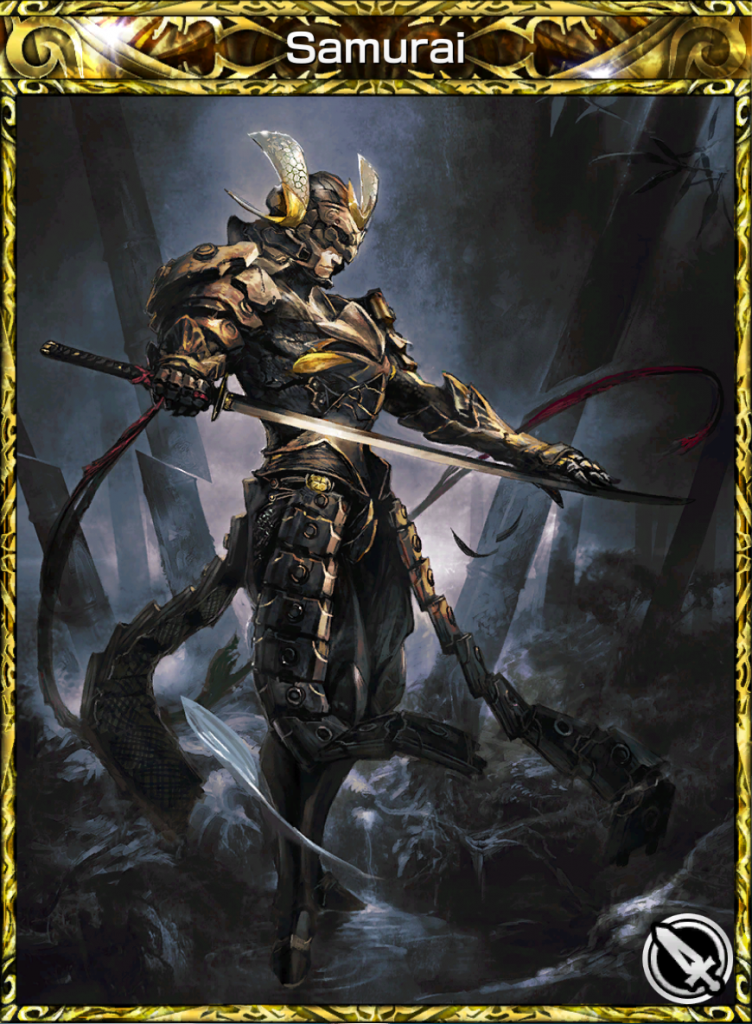 Meanwhile in the Global ranking, it’s Samurai who takes the first spot.

1) Most Powerful Ultimate Ability. Obviously, why else would he be here? Anyway, Samurai’s Ultimate, “Iai Strike”, is capable of taking down all enemies on the field at once, and it’s also a multi-hit ability. If you strategize well and use it at the right timing, you can easily hit high scores – and rise quickly on the weekly ranking list! It’s ranked first (second in Japan) among all jobs that can induce area-effect Ultimate.

2) One For All. Even without his Ultimate, equipping Samurai with ability cards that inflict area damage can still bring out the true potential of this job.

3) Customized Power-Up. (Japan Only) Equipping Samurai with his job-specific Custom Skills from the “Hall of Fame” region can further boost his base ATK stat, increasing his overall damage rate. During Break, his damage points may be tripled due to his fourth Job Custom Skill, “Break Burst +200%”.

In exchange for high firepower, Samurai has one of the lowest HP stat among all Wol Jobs, which makes him a glass cannon job that relies heavily on good strategies, well-timed attacks and boosting his defense with a more supportive deck. This makes him a more difficult job to use and handle, especially for novice players.

With that, we have covered the latest rankings of the Wol jobs so far for both the Japanese and Global versions of Mobius Final Fantasy, with a breakdown based on their respective statistical categories.

Once again, the rankings shown here along with the figures are only for reference purposes only. This game is not quite the same as your conventional grinding RPGs, so you still need to think a bit to get better at battling. 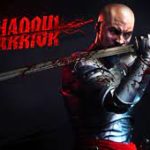 Shadow Warrior – Save Game
Next Article 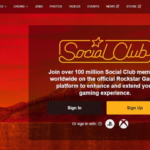 How to Play Custom Jobs in GTA Online