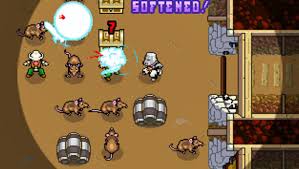 Roguelikes have a massive following among iPhone gamers. In fact, Sword of Fargoal was the runner-up in our Game of the Year (People’s Choice) poll conducted last December. 100 Rogues is the latest dose of one-life dungeon crawling action, but unfortunately it doesn’t live up to other App Store roguelikes due to loads of bugs and some other loose ends that make it feel more like a beta test.

As with any roguelike, the goal is to lead your character through a seemingly-endless, randomly-generated dungeon. 100 Rogues is split up into a five-level Bandit Hole, and then the main dungeon, where you must fight through countless enemies to face off against Satan and reclaim your honor amongst the higher-ups in the feudal government.

There are two classes to choose from: a human crusader and fairy wizard. The big difference is that the crusader specializes in close combat and the wizard specializes in ranged combat. Both have unique skill trees with some awesome powers, our favorite of which is what we like to call the ‘godfinger’, where God’s finger will touch you or enemies at random moments, healing you and dealing massive damage to them.

100 Rogues is full of personality. Most roguelikes give off a much more serious vibe, but 100 Rogues is borderline playful at times. This not only makes it much more approachable for new players, but it offers something that’s lacking in other roguelikes.

On the other hand, 100 Rogues is marred by some relentless bugs that cause the game to crash, freeze, have graphical glitches, and on rare occasions kill your character without reason. Controlling your character is done by swiping and holding, but slightly moving your finger causes your brave adventurer to go the wrong way and possibly fall into a trap. The frame rate is also quite low, which makes little sense for a game that doesn’t appear to be using the iPhone’s processor to its capacity.

Inventory management is also lacking in 100 Rogues. Items don’t stack correctly, and there is no good method of destroying something other than to throw it on the ground or at an enemy. Plus, the entire system is controlled through buttons, as opposed to a more logical drag-and-drop method.

The most disappointing thing about the game is that the challenges don’t appear. We tried the game on a Wi-Fi iPad, iPhone 3GS, and iPod Touch 3G, and each time the challenge window came up blank. According to the 100 Rogues website, these missions are short puzzle-like levels where you must fulfill a certain requirement. This could have been the most interesting part of the 100 Rogues package. Chances are the developer will address this in an update.

Once you finish a run through the survival level, you are given a stat table that tells you how many of each kind of enemy you killed. However, once you click out of this, you lose access to it. There is also an online leaderboard, but it only displays the top few scores. We think it would be more fun to see where you rank in the grand scheme of things.

With so many issues cluttering up 100 Rogues, it’s safe to say that this is one to pass by at the moment, even for hardcore roguelike fanatics. It may have potential, but this version of the game feels unfinished.

1000 Heroz is certainly ambitious. The premise for this fairly bare-bones side scroller is that every day a new level is unlocked, leading to an eventual 1000 levels– each with a different character. The mere logistics of how much space the game might eventually take up are mindboggling, but kudos to the developer if they can manage this herculean task.

1000 Heroz is a game purely about running and jumping through side-scrolling obstacle courses to attain the best possible time. You can then share your time with the world via Game Center and OpenFeint, and see how you’ve fared against everyone else. Each level can generally be completed in less than 20 seconds, and since there’s a new track each day, 1000 Heroz has a nicely addictive quality. Following the leaderboards and tracking your times against other players could shove the more obsessive-compulsive among us into a life-sucking vacuum.

That said, the game is very focused on its central gimmicks. Daily new content and easy tracking of the competition will likely end up being the sole appeal. All you do is guide your character left or right, and jump. The controls are iffy with floaty physics and a slightly unresponsive feel.

Level design is generally clever. The incredibly compact tracks frequently offer multiple paths to the finish line, and are littered with pace-killing obstacles such as rocks and pits. Springy branches, bouncy globs, and springboards can prove to be a boost or a hindrance, and the touchy jumping segments can be frustrating. Thankfully, the levels are so short that having to repeatedly start one over isn’t a big deal.

The cartoonish graphics are sharp and colorful, and the handful of levels available show off a decent variety of scenery. While each new level brings a new character, there’s really no difference between these motley cave men and women. They all look like characters from an old Saturday morning cartoon, but there’s no back story or character building to be found in 1000 Heroz.

For a quick, cheap gaming fix on the go, 1000 Heroz has enough going for it to be worth a look. Although the controls aren’t nearly as precise as we’d like, the sheer variety (and potential variety) of tracks and the generally good level design makes up for other shortcomings. The creative focus on leaderboards adds an entertaining sense of competition to the simple gameplay. We can’t imagine too many players still racing by the time the 1000th level is released, but for now this is a decent way to spend a buck.

Imagine how different history would be if the Axis powers had developed auto-fire technology before the Allies. If 1942’s version of World War II is factually based, and we have no reason to doubt that it is, it’s a good thing our side was spewing bullets non-stop while the Germans fired carefully chosen but strangely slow-moving projectiles.

At least, we think we’re fighting Germans. 1942 is intentionally vague in everything from its graphics to its level descriptions. Who can forget the historic battle of “Ocean Environment”, or the tragic bombing of “City Environment?” 1942, for a game based on an arcade classic and Xbox Live Arcade remake, is strangely lacking any personality.

There are glimpses of character, though: You can choose one of three different planes, switch between missile and bomb special attacks, and each level is introduced by about two seconds of CG animation. Most of the time, though, it’s a tedious experience as you demolish the enemy’s planes while taking very little returning fire.

Shooters like Espgaluda II and Assault Squadron make you work for your victories, but in 1942, they’re handed to you with a shrug. Towards the end of the game we had completely maxed out our weapons, special weapons, and lives, and losing never seemed like a remote possibility. Not every shooter has to take you to “bullet hell”, but 1942 is completely devoid of challenge or variation.

1942: First Strike is a nice-looking game, with art assets pulled from the Xbox Live Arcade version, and it runs smoothly as well. But the game design seems to be pulled from an era of mobile games when challenge and excitement couldn’t exist due to hardware limitations. It’s just not fun to sit back and watch this game mostly play itself. We’ve come to expect a lot more from iPhone games, and we think Capcom can do better.