This guide will provide you with a build for ASPD knight in Ragnarok X Next Generation.

Jack of all trades. It is an off-tank, aka offensive tank. So you are a DPS who can tank as well. It might not be as good as a full tanker that uses a full VIT sword build. But with the help from a slave priest, you will be fine. You can also act as a 2nd tanker. Your DPS is top notch. You will be more useful in instance or endless towers. So, the first stats are essential. Our final stats as lord knight will be different.

As lord knight, your stats will be Agi and luck. But in the early game, you can’t do that.

So you need to go for str, agi and dex instead.

You can put ten dex if your attacks miss some monster, and the rest is Agi, no Vit for now. Later as a lord knight because you can put extra points to Vit.

In the early game, you will need damage because you lacked good equipment and skill. You have to pick the right skills first, so it can help you level up easier.

Then get into battle first because it will increase your damage to normal attacks.

Max it, and you will get additional damage per 50 str. Next is the Sword Mystery, more agi, more damage. Magnum break damages not only enemies but also buffs your normal attack.

Your weapon will have a fire element. Remember, don’t use this against a fire or water enemy as it will decrease your damage instead of increasing it. Increased Recuperative Power aka Regan HP is useful when you are AFKing. Make sure your bag weights are not over 50% because it will disable your regen.

You have to bring your trash to your Lovely Kafra Lady and let them take care of your trash. Endure will add extra def and magic def. Melee knock-back is our worst enemy, and it’s a nice buff to have in PVP. If you don’t like it, you can get Bash instead. But Bash without Fatal Blow is not worth it. In Knight Skill Tree, you will need to get Cavalry Combat first and max it first before riding the peco-peco. You are a Noble Knight. The ground is dirty so, ride your peco-peco.

There is an ASPD Penalty if you didn’t get it to level 5. The most important benefit is speed, you have to move faster, so it is easier to attack. Then max your sword speed boost for more ASDP. This skill will benefit from Agi a lot.  To make your swing even faster, you can Double blow because dealing extra damage is nice. A normal attack will trigger it. It benefits from luk. It might not be strong for now but later as lord knight.

Get your bowling bash and extra AoE will always be useful.

But ain’t this normal attack build? Yes, but in instance and endless tower, you will rely more on AoE unless it is the boss.

This skill is really good in pvp as well. When you are an assassin or fellow knight.

Once you use yjr Agi luck build, this skill will show its usefulness.

The rest went into cavalry training. Sadly, you can’t get to this level 10. You have to get parry first in the lord knight skill tree, a chance to block damages. Flee and parry will make you survive longer and also make a normal attack crot for a while. Concentration is a buff for a party; more damage if you mark your enemy.

Lord Aura is also a party buff, it will increase your party’s ATK. This skill will make your normal attack and crit stronger. Bleeding is very useful as well. The last is Frenzy aka Berserk. Pvp skill for sure, don’t you dare use this in an instance or ET.

You can use this to farm MVP and Miniboss. When they are dying and want the last hit, you can craft an adventure set for all slots.

Not sure if they will add more sets later, but it is the best one for now. Crafted accessories are good; they add stats by a lot.

It is CBT, but later in obt, you will need to craft these as soon as possible. Ragnarok is all about investment, farm the right stuff and make use of them. Smart people will save their GBT Horn. so you can’t buy it. You have to keep spamming drake hard for level, but you forgot about this awesome set.

It is suggested is to get a card that increases your basic stats, especially luk. You need a lot of luck for higher crit rate and crit damage. Don’t worry too much about ASDP since you can use buff or food.

Increasing str is also a good way to focus on luk; just aim for at least 50 str. Bonus damage is also nice to add more damage modifiers. The priests can heal starting from the 20th floor.

There are no useful tips but don’t mob too much. They should make at least full recovery for HP and SP every new floor. You need a good party who understand basic mobbing and skills. You can auto but don’t AFK. since your character will charge like a deadman. 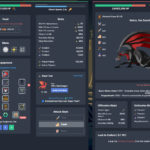 How to Idle Dungeons In Melvor Idle
Next Article