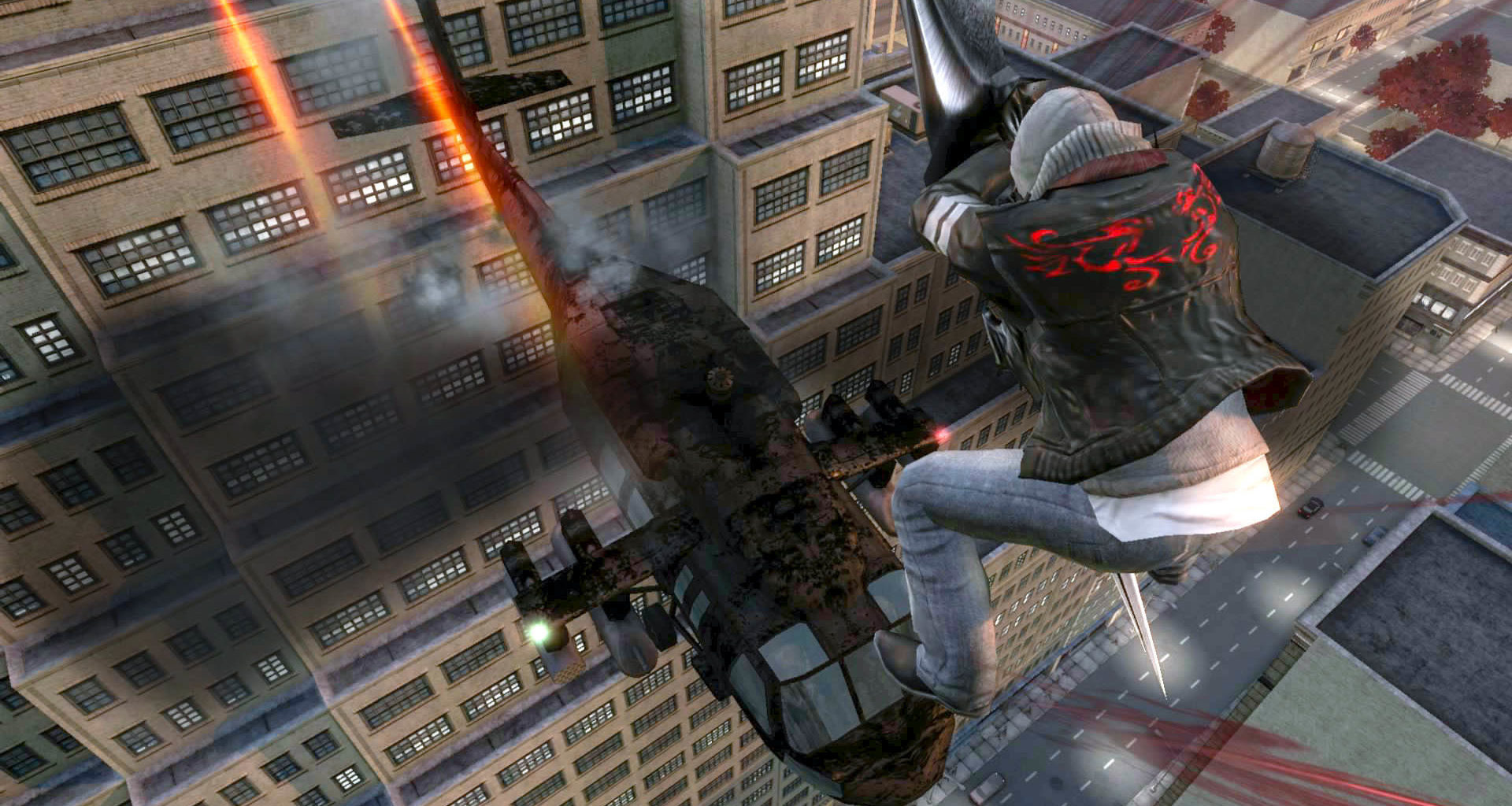 Prototype is the latest sandbox game to come out of Radical Entertainment – developers of the awesome The Incredible Hulk: Ultimate Destruction game from 2005 (along with more recent titles Scarface and some Crash Bandicoot games). The premise is relatively straight forward – navigate the free-roaming city environment, complete missions (both story-based and side missions) to progress. Earn Experience Points (EP) as you do, which you can then use to improve your various abilities and increase your effectiveness at taking down the bad guys.

It’s in Alex’s abilities that Prototype stands alone – sure, on the surface, the premise of having incredible super powers that enable your character to obliterate foes en-masse sounds pretty similar to Sucker Punch’s inFamous, but the gameplay starts off quite differently from that title, and then continues to diverge from there.

For example, to get to higher ground (such as the top of a tall building) in Prototype, the player simply needs to hold down R2 and Alex will run right up the side of the building. Alex’s offensive abilities are also markedly different and built around Alex transforming himself in various ways to enable him to more effectively combat the various foes he’ll encounter. Turn your hands into blades, a la Edward Scissorhands, for example, and you’ll tear to pieces (literally – it’s very gory) any humanoid that strays into your arc. Turn your fists into hammers however and your humanoid chums will fairly easily evade your swing but tanks and other armored vehicles will be pulverized by a mere glancing blow.

Alex has a great deal of ability when it comes to interacting with his environment too – you can pick up almost anything and, thanks to the simple targeting system, you can then chuck that something at something (or someone) else with ease. Things can get a little clumsy when interacting with pedestrians (which there are a lot of), who are almost impossible not to kill. Run around on the street expecting them to part with a small shove here and there like Assassins Creed and you’ll be in for a shock – if you run too fast here you plow through people like you’re a boy racer, bodies piling up behind you. Eventually you just ignore them and stop trying to save them – killing a thousand in the course of a mission (you get a handy tally at the end of each) is par for the course.

The number of abilities at Alex’s disposal and the various improvements, upgrades and sidegrades available is daunting. The controls start off understandable enough but fairly quickly things get almost out of control with the level of nuance available to the particularly dexterous. Most gamers will probably be overwhelmed and elect to stick with a simple subset of Alex’s abilities, but for those with impressive memories and even more impressive twitch control, they have the option of getting seriously involved in combat techniques. The level of over-saturation of abilities is only increased by the fact that you seem to be able to generate massive levels of EP extremely quickly, which results in you being able to pick up handfuls of new skills each time you remember to go into the upgrade screen.

The visuals in the game, for the most part, suck. The textures and geometry are almost universally extremely low resolution, animation is rough (and downright poor in parts) and vehicles turn into weird black glassy chunks when destroyed. Objects disappear when still quite close to the camera, huge chunks of the city are bland and featureless and we even found one building where a big chunk of the wall isn’t even textured – you can see right through the world.

This low visual fidelity is no doubt in part due to the extreme chaos that can ensue (it’s not uncommon for there to be seemingly hundreds of characters, vehicles, helicopters and weapons fire to all be on screen at once), all of which is handled without noticeable frame drops, but it is still pretty jarring when you first start playing.

Once you get the hang of the game’s controls and get used to the rather sub-standard visuals, you realise that you’re actually having a hell of a lot of fun. Alex is able to dish out a hell of a lot of punishment, quite capable of taking on hundreds of enemies at once. Should you find your health draining, an easy and quick way to get a significant top-up is to grab and basically puree some random pedestrian for a health boost.

There’s a lot more to the game than simply cruising around destroying people en-masse – while it does excel at that idle activity more than any game before it (even, perhaps, GTA!), you can (and must, occasionally) stealth your way around in order to infiltrate or escape. Simply absorb another human and you can shapeshift into their form and sneak around in plain sight – beware, though, as the game will keep you on your toes by introducing detection techniques that will keep you thinking. Fortunately, you can upgrade your stealthing skills to keep pace with the enemy upgrades and the constant “arms race” helps to keep things interesting.

Combat is straight forward enough, but even here, it feels like a little more time would have resulted in a more compelling experience. It’s fun and you can do lots of stuff but you still find yourself accidentally falling off the side of a building or attacking a car when a dude with a rocket launcher or a hunter is wailing on you. Constant use of the targeting system is the order of the day and at times in the chaos this can be a little tiresome.

When the dust has settled (and that takes time – Alex is practically able to send dust into orbit), Prototype is a good game. If you can handle some fairly significant visual glitches and aren’t looking for a shiny example of “next gen” gaming, it’s even very good – but we can’t ignore the fact that the gloss is entirely absent. There’s a fun game underneath the garish surface and there’s plenty of it, too. Can you handle the fact that the graphics look like they didn’t go any further than the Prototype stage? If you can and you like the sound of incredibly high-energy action where you get to chuck cars at helicopters, snap it up.