His wonderful appearance and exceptional skills make Ruby one of the most wanted heroes in the game. The major ability that distinguishes from other characters is Scythe. Other than aesthetics, she possesses awesome potential in the game (both in crowd and damage control) in AoE. If you are surrounded with enemies on all sides and you want to escape that situation by deceiving your opponents, then Ruby can work the best for you.

We will give you a guide for this hero that will let you know everything about this super build!

Like all other players, ruby has got her positive and negative aspects:

She is capable of a decent crowd control /damage in AoE and very hard to take down.

Ruby has got a sophisticated agility, which gives her dominance over remaining players. Beside this, she has got deceptive moves that are, at times, hard to defend.

She always plays to her utmost potential and can stun any enemies with her extraordinary skills.

She can sustain a great deal of damage.

Sometimes she can be sloppy and her own attacks can make her vulnerable in some cases.

Her burst damage isn’t extraordinary and can just prove handy in some cases.

It’s really hard to buy her as she is quite expensive.

This build has got some fantastic traits and it won’t be an overstatement to term her as one if the best builds in the game. Ruby has got this unique ability of quickly jumping from one place to another after releasing a skill. On jumping back help her to increase her armor for a short period of time. This effect is likely to increase as the game progresses. Talking about her basic attacks, she can’t trigger lifesteal effect but the rest of all her attacks will trigger 100% steal effect. Owing to these attacks, she can be efficiently used for both defense and offense.

Offense enables her to control the crowd

Defense provides her with armor!

What a perfect blend of various strengths!

Ruby uses her scythe attack adeptly to attack swiftly and that increases her damage speed by 50 points. In other words, she can cause 50 % damage to the enemies in front of her. Additionally, she sends a special wave that inflicts 50 % damage on all enemies affected by it.

Moreover, she also has the ability to launch the giant scythe attack twice to wreak havoc to the enemies. Every single attack deals 40% physical damage that causes the enemy to Stun for a period as short as 7 seconds. She also can drag the enemy’s closer to her. Ruby causes 30% damage that belongs to a different ring and doesn’t belong in the sphere of her impact.

One of her exceptional quality is crowd control that can negate the effect of many of the opponent’s abilities. Also she can unleash an additional damage up to 30 by killing the enemies that stand out of the ring.

What does Ruby do when she is offended?

If you offend her, she is simply not going to spare you and will teach you a good lesson. Yet again she uses her Scythe attack horizontally that has its impact on a wide range. This inflicts a remarkable damage of 205 and allows bringing her enemies closer and stunning them for 5 seconds.

Fallen sword is one of these build phenomenal weapons. 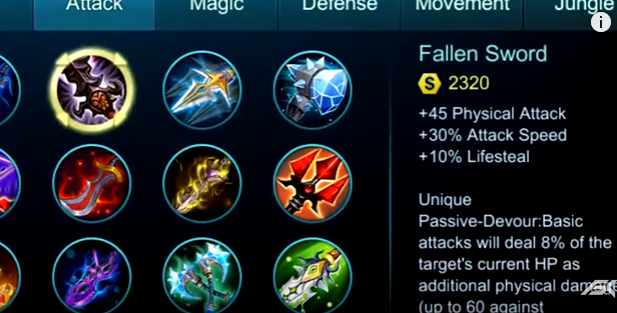 Besides her life steal that is very crucial, her attack speed is also decent. Her attack speed depends solely on how fast you attack your opponents. Moreover, health steel is usually high for all those characters that don’t really have a good health and armor and things alike. Also it depends on how fast you attack your rivals. If you manage to attack them with a super-fast speed, you will heal yourself extremely quickly. 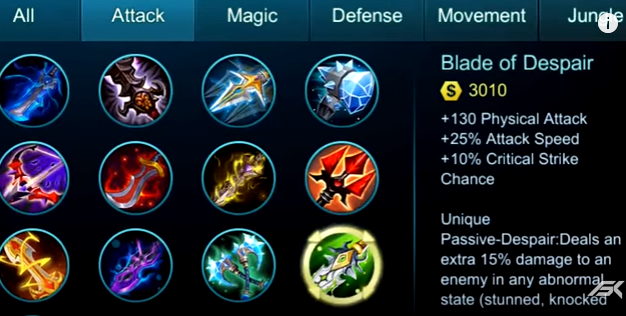 Her physical attack is exceptionally good as it gives her a physical attack of +130%. That is huge as compared to the physical attacks caused by other items. Moreover she has an attack speed of +25% and a +10% critical strike chance. It is to be noted that your healing is directly linked to your attack speed. The greater the speed, the greater will be the healing ability. Similarly, attack speed enables you to inflict greater damage in less time and also gives you some critical hits.

Her cool down reduction enables us to cause greater damage in not much time. Also it allows us to use our abilities much faster. The +100% physical attack speaks volume about his immense attacking capability. Ruby has got the 2nd best physical effect after blade of despair. This physical attack strength allows her to treat her opponents with brutality. She is basically a tank and that’s the reason why she is hard to knock down.

Tooth of greed gives you

+75 % physical attacks along with

Ruby also has got magic shoes that enhance her