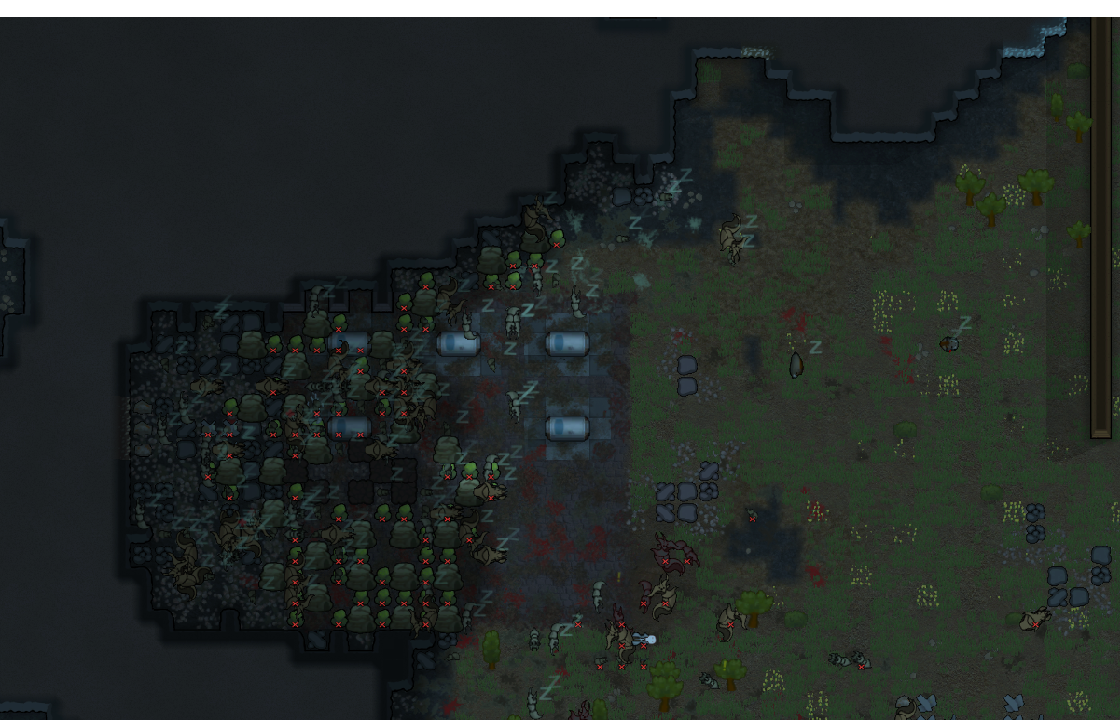 Rimworld: How to Kill Infestation

If you get a massive infestation in one of the areas in your base, here is how you can deal with that. There is an easy way – obviously, you have to worry about them breaking through the walls – if you can contain them within the walls. As you can see here, this is a grown and massive infestation.

So I have placed one of my men on the left, and he is carrying an incendiary launcher.

Now, either an incendiary launcher or a Molotov is good for this. What you have to do is fire inside, and let your man escape quickly through the door – I’m assuming that you have placed a door there.

All you have to do is keep firing until you get the fire going in the hive. You can see the increasing fire here, but it will require more than one shots.

Make sure that you get enough stuff burning. And as you can see, there are like 30 or 40 alien creatures inside here, and make them fuel for this fire. Also, make sure that the aliens don’t see you; otherwise they will make a water attack on you.

An important thing is that your goal shouldn’t only be the setting of a fire, but you should also focus to increase the temperature inside the enclosed space. As the fire can’t reach everywhere, the temperature will do the job. The higher temperature will kill all the aliens wherever they are hidden. Here is what happens when you keep on increasing the fire.

You can see these ancient pirates burning in the inferno. At this point, the temperature of the base is more than 2000 degrees where nothing stands a chance. My man who set fire to all these things is waiting outside, seeing everything burn.

Another important thing is that the outer boundary of the space should be of stone or rock, otherwise the heat will be transferred outside, and you won’t be able to maintain a high temperature. Finally, when the fire will cool down, you will see all the aliens eliminated.

There are other ways to kill the infestation as well, but those methods are very dangerous. One such method is killing the aliens one by one with guns. As is obvious, the aliens will attack back at you, and your man will also get some injuries. On the other hand, if you use this firing method, all the aliens will be killed without you getting any injury. All you will have to do is watch the aliens burn as your man stands outside the space.