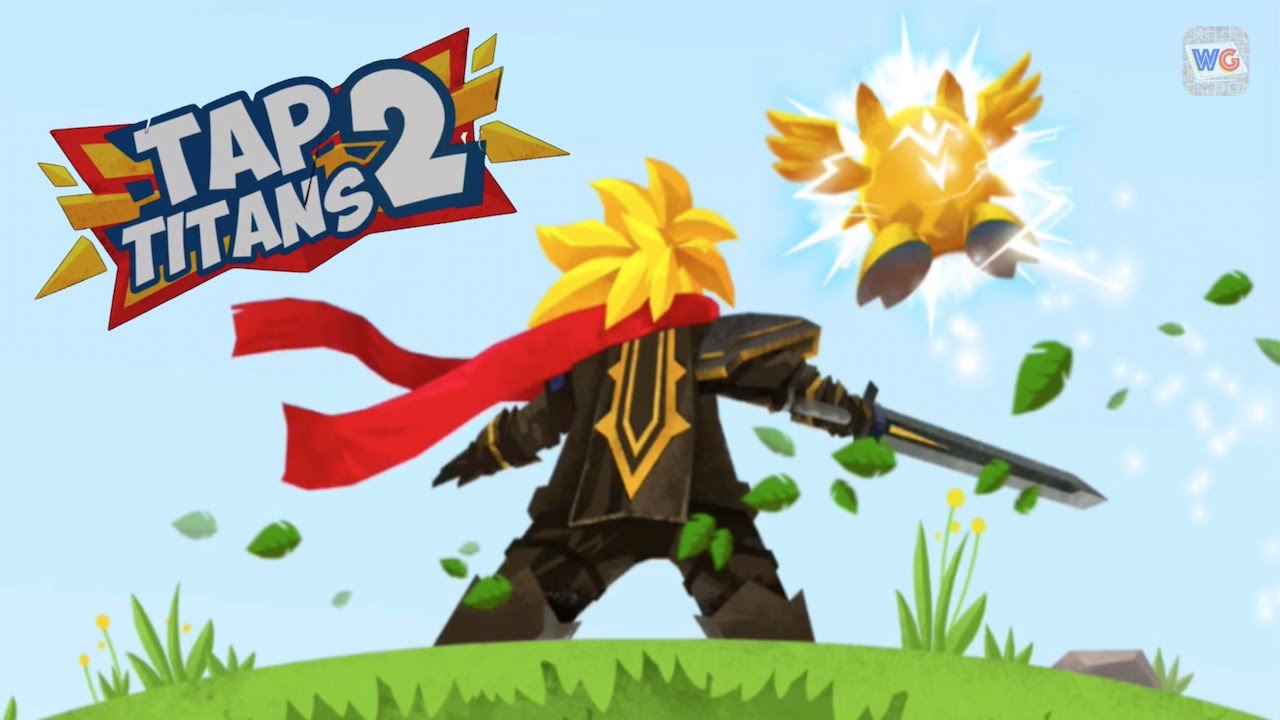 Tap Titans 2 is the 2nd genre of original game “Tap Titan” that has received zealous respose for the gamers throughout the world. It has been released on Android and IOS platforms. We are going to give you a concise description of the game that is especially meant for those who haven’t played this game ever before.

The adventure kicks off from the point where the first version ended. The powerful and indestructible sword master is back to defend the world from the invasion of extremely troubling and dangerous army of the “Titans”. Now what you will be doing is to equip the powerful sword master with all the latest weapons that are available to you. All the players will be dealing with 20 new items across ten different stages. You have the opportunity to induct new characters and provide them with loyal pets that can save you from the titans. Also you can unlock skills to enhance their power and design them the way you like.

Well those who have played the game must be aware of the fundamentals. This article is primarily meant for those who are unfamiliar or possibly even heard of this game before. It will even help the experienced players who find it hard to deal with certain aspects of Tap Titans 2.

Basic guide for the amateurs

As the name suggests, the game revolves around tapping. You can kill the titans by just tapping on them and if you dislike tapping or can’t tap too fast, it can give you a hard time by impeding your progress. So, it’s advisable that you invest sufficient gold in your main hero (The Sword Master) but that’s just not enough. You have to give your level best in order to get to the highest level possible. Carry on and until you reach a point where the progress begins to slow. That’s the right time for pressing the button and restarting your game from level 1. This will have an impact on your progression and it will become faster than your previous run. You have to continue doing this until you either you:

2) The game server shuts down

The layout of the game is quite similar to its predecessor. You have the main character as your hero that stands in the center of the screen and this hero is also the major tapping damage source that inflicts severe damage on the enemy. Moreover, the characters on your sides (both left and right) contribute towards your DPS (Damage per second). Those players who find tapping hard will not be very comfortable during the early stages of the game. Want to know why? It is because the heroes DPS is pretty deplorable in the beginning. So the only way to get through this hard situation is to tap with Fire Sword Active.

The general opinions reveal that the sequel is pretty better than its predecessor. It gives you greater opportunity to customize or level up your heroes and make them look as you please. Moreover, you must be told that the other characters that are far beyond your control won’t perform equally better. Put simply, the automatic characters will have an ordinary performance so your main focus must be on leveling up your major hero “sword master” by upgrading your hero (sword master) with plentiful Gold. It is important to tell you that you must focus more on upgrading your main hero that is sword master. Make the best use of remaining fingers along with the one you are using for tapping. The maximum number of fingers that you can use will mainly depend on the size of your device screen. So we suggest you to thrust ruthless damage to you enemies. Well again, it all depends on how fast you can tap, tap and tap!

Most of the qualities are the same from its predecessor Tap Titan. In fact, all the 5 qualities have just been recycled to make them functional in the game.

What is fire sword?

This is another incredible skill that gives you abundant gold when you activate it on the boss or a chest resan. It’s strongly recommended that you should make the best use of it when the wall becomes exceedingly tough to break.

That’s all about skills

What does prestige mean?

Prestige is basically a noun but in the world of games it is frequently used as a verb. It’s a phenomenon in which you reset your game and lose most of the items that you have collected throughout your journey.

When to prestige for the very 1st time?

The simple answer to this question is that you should go for the prestige after you have finished 100 levels. It can be done at any time after level 100 (105 or 106 so on and so forth).

Different Artifacts in the Game

This thing actually decreases the mono cost heavy strike which is truly a worthless skill.

Salvage is a feature that that enables you to refund the artifact for another. This comes with the cost of 52 diamonds. But it should be informed that this cost increases with the number of artifacts you currently possess.

How to earn maximum gold?

Earning sufficient gold is a very crucial part in the game. You will have to bring some changes in your gadget setting (mobile or tablet). The second thing is to turn off the screen saver that usually appears when you are performing no activity. Don’t turn off the game while you do this. Make sure that your phone is fully charged and it doesn’t run out of battery. Quick boss battles afterwards and let your automatic heroes deal with the boss’s minions. In this way you can amass gold to maximum level.

How to upgrade weapons?

Weapon up gradation is directly related to you hero’s DPS (Damage per second). If you somehow manage to upgrade the assorted weapons that you have, you can get a huge DPS multiplier for all your squad!

One of the advantages that you will derive by playing tournament level is that you can get to prestige before reaching the level 600.

Upgrade your artifacts instead of buying new ones

You will get to a certain point in the game when you will have to choose between buying new relics/artifacts or upgrade the existing one. Upgrade your artifacts in order to give your characters enhanced damage either active or passive.

Automatic heroes are usually weak but the can prove really handy when you are not into the game. For instance, you have gone to sleep or you are engrossed in something more important. These offline heroes can help you in a couple of ways:

1) They can help you earn ton of gold

2) They come with a DPS (damage per second) multiplier in the 10th level.

3) Additionally, your heroes will acquire some passive skills that are sometimes more important than the active skills.

So, your heroes must be fully equipped in order o derive maximum benefit!

How to get offline pet earnings

The game can give you pets when you are in the offline mode. It is quite similar to earning gold but this time you will get a free pet. It’s just fine even if you get a duplicate.

Cheat that is forbidden

If you have played Tap Titan, you will remember the cheat that allowed you to skip time and earn ton of gold in no time. But things are different in the successor of Tap Titan. The game developers are keeping a check and they won’t let you skip time in order to end your wait. You may even get suspended just because you are trying to skip time. So be cautious!